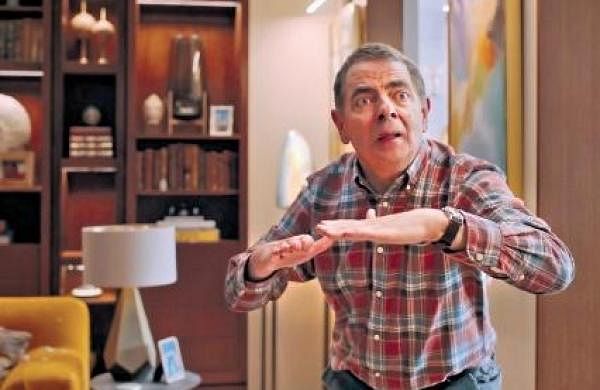 Rowan Atkinson and William Davies reunite for the comedy series Man vs Bee, now streaming on Netflix. Directed by David Kerr the series is divided into nine 12-15 minutes short chapters. It captures a house sitter Trevor Bingley (Atkinson) house sitting for a wealthy couple in their ultramodern, expensive and interconnected home. The house contains voice lock mechanisms, motion sensors to open storage areas, expensive paintings, rare manuscripts and a vintage Jaguar among other cars. It’s also Trevor’s first day on the job and a bee enters the home just as he does, making his life hell for the next forty-eight hours.

The character of Trevor Bingley might remind us of Atkinson’s more famous Mr Bean persona, even the name feels like an extension. While Bean is played in a tone suited for children and can come across as either a lovable or despicable fool in most situations, Bingley is more a man of circumstance. Recently divorced and looking forward to a modest camping holiday with his teenage daughter, it’s a job all-important for him. Except the bee is in his way.

The series plays out much like situations Mr Bean would find himself in, but Bingley goes for the more intelligent if desperate options and doesn’t mind coming across as vain. There is everything one would associate with Atkinson here—physical comedy, scatological humour, slapstick as well as some moments worth pondering about.

The bee stings Bingley where it hurts the most. Christian and Nina are sceptical about the odd seeming Bingley but give him a 2-minute lowdown on the idiosyncrasies of the house and their dog—Cupcake—with a nut allergy. The house has a manual of instructions with details on how to operate—yes living in the house is active work.

It’s more a book than a series of instructions, the size bigger than most famous novellas and predictably is burnt to ashes in the first couple of hours Bingley spends at the house. We get throwaway moments of Bingley with his daughter as he juggles his life, the bee, a dog and all the valuables inside.

As silly as the premise is and as simplistic the humour can be, it is due to Rowan Atkinson’s conviction and trust in the material that Man vs Bee remains funny and watchable. We are the surveillance cameras in this modern home, looking at and judging Bingley’s actions while also learning about him and the people living in the house even if they are holidaying and therefore not on screen. There are no great statements made but it’s not lost on anyone that Bingley arrives wearing the blue jacket of the company he just joined.

He is a blue-collar worker, a member of the working class finding himself in a corner both personally and professionally and the corner he could find was Nina and Christian’s plush home that stands like a testimony to the internet of things. A cupboard can be opened with a wave of the hand, Bingley has a tough time figuring out how to get water out of a tap and the bathroom shower and the piano can play itself. It’s like a crude awakening to how we have electronics to control and secure everything and yet a human being working for minimum wage is required to guard it while the posh couple is away.

The series even does misdirection well. At one point we are made to feel sorry for the bee when Bingley reads something on the internet about the male bee and how it is booted out of its community once its part is done. Just when we think the series is gearing towards sentimentality by making an unlikely comparison it takes the liberty to whack our heads and reconsider our position. Trevor Bingley needs no one’s pity. He can dispatch the devils all by himself.