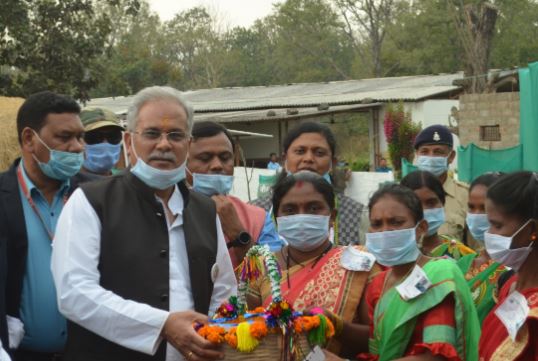 Mr. Bhupesh Baghel expressed happiness on seeing the dream of enriching the poor financially from Gothans. Chief Minister Mr. Baghel arrived in Gauthan run by the municipality here during his two-day visit to Bijapur and got to know the condition of women engaged in various employment oriented jobs. When the Chief Minister reached Gowthan, the happy women presented the Chief Minister with cow dung, flowerpot and idols.

During this, the Chief Minister inquired about the income from the milk production of cow and buffalo and sale of cow dung through the women of the mother Danteshwari Women’s Self Help Group. The women said that Gauthan has been constructed to keep stray animals here. In view of the adequate availability of fodder and water in the Gauthan, the women operating the Gothan have also started keeping their domesticated cattle here. The women also informed that a bio-gas plant has also been built in Gothan, due to which there is sufficient availability of fuel. High quality fertilizer is also being prepared by this. He informed that vermi compost is also being produced here. So far, about 300 quintal vermi compost has been produced in Gauthan, out of which 33,000 rupees vermi compost has been sold.

Members of the Manikanchan Women’s Self Help Group following the native cock in Gauthan said that due to the good demand of native chickens, they have been motivated to follow it. She told that she is also producing mushroom here. The Chief Minister was happy to see the confidence of women moving forward on the path of self-sufficiency and said that it is a pleasure to see the dream of the poor becoming prosperous. He wished the women to make the family happy through these economic activities. On the occasion, Minister in charge Shri Jai Singh Agarwal, Industries Minister Shri Kavasi Lakhma, MP Shri Deepak Badge, Vice President of Bastar Development Authority Mr. Vikram Mandavi and Mr. Santram Netam, District Panchayat President Mr. Shankar Kudiyam, Commissioner Mr. GR Churendra Inspector General of Police Mr. P. Sundararaj, Collector Shri Ritesh Agarwal, Superintendent of Police Shri Kamalochan Kashyap and public representatives were present.