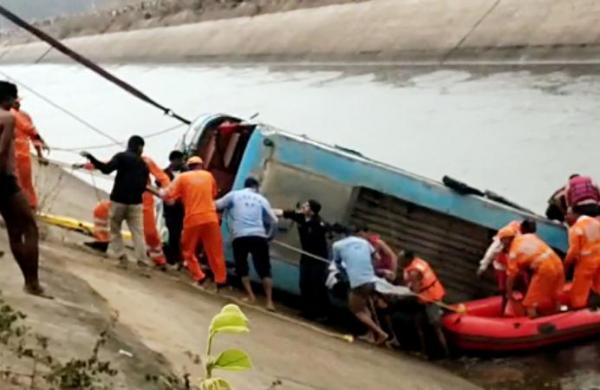 Express News Service
BHOPAL: A day has passed since an overcrowded private bus fell into a canal in Madhya Pradesh’s Sidhi district killing at least 51 people. However, what caused the tragedy still remains a mystery.

While the primary probe suggests that the bus driver could prima facie be responsible for it, the bus driver arrested from the Satna district claims there was an abnormal sound in the bus, after which it automatically sped into the canal.

Middle-aged Balendu Vishwakarma, the bus driver who was arrested from Satna district, just a few hours before CM Shivraj Singh Chouhan arrived in Sidhi, claimed, “There was a strange sound in the bus, about which some bus passengers also complained. Before I could understand as to what happened, the bus automatically powered into the canal.”

“A girl passenger got out of the bus in the water and I followed her. Then some villagers took us out from the canal with ropes. Had I remained on the spot, people would have lynched me. I had no option, but to flee to Satna district,” Balendu said.

While maintaining that 50-55 passengers could’ve been boarding the bus (the bus was 32-seater) when the mishap happened, the driver said, owing to prolonged jam for the last few days on the Chhuiya Ghati (NH-75), he had to take the alternate route.

Importantly, the bus was permitted by the transport department to operate between Sidhi and Satna via Chhuiya Ghati and after Tuesday morning’s mishap, the bus’s permit has been terminated.

According to the state’s deputy transport commissioner AK Singh, who is in Sidhi to probe the mishap, “The probe has just begun, but initial fact-finding, including the bus being overcrowded, suggests that prima facie, the bus driver was at fault.”

However, the bereaved families considered the prolonged traffic jam on the main Sidhi-Satna route (that prompted diversion of the bus through another) to be the genesis of the mishap.

“Since last four-five days, there was a traffic jam on the hilly Chhuiya Ghati (NH-75) which forced the bus to divert to another route. Had the jam been cleared, the bus wouldn’t have run on the alternate route and the mishap might not have happened,” Anil Kumar Gupta, who lost wife Pinky and toddler son Atharwa in the tragedy, said.

The Gupta family, which lives in Ward No 7 of the Rampur Naikin town of Sidhi district told the same thing to the MP CM when he visited their house on Wednesday.

“Please ensure that the jam on Chhuiya Ghati, which has been a regular feature for years is permanently addressed and no future tragedy takes place due to it,” the bereaved family appealed to the CM.

In Tarka village of Sidhi’s Bahri block relatives of the deceased young couple, Sushila and Pushpraj Prajapati too considered prolonged jam on Chhuiya Ghati the genesis of the mishap.

“Traffic jam on Chhuiya Ghati (which is often frequented by heavy vehicles of a cement factory and coal mines) has been a regular feature for last many years. The main route was again witnessing prolonged jam for the last 4-5 days, but no serious efforts were made to clear the jam. Had the bus not taken the alternate route, the mishap might not have happened and my brother and sister-in-law would not have died leaving their two kids behind,” deceased Pushpraj’s elder brother Prithvi Raj Prajapati said.

Opposition Congress’s state president Kamal Nath accused the inaction against the uncontrolled transport mafia for the mishap. “Unfit and overcrowded buses are running with elan in the state sans insurance cover. Buses lugging people like animals are running sans equipment like speed governors, but no checking and penalizing of such buses is happening,” tweeted Nath.