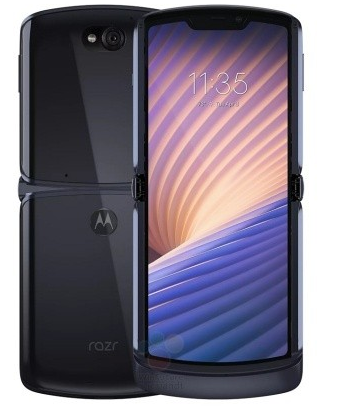 Motorola will announce the Razr 5G later today but WinFuture couldn’t wait any longer and shared a full specs rundown of the foldable complete with its official renders and a €1,500 ($1,760) suggested price tag. The phone had seen its fair share of leaks in the past months which already painted a clear picture of the new changes from last year’s Razr 2019.

The overall design remains quite similar to last year’s Razr with a plastic 6.2-inch foldable OLED panel with a 2142 x 876-pixel resolution and tall 21:9 aspect ratio. The notch is still present housing the earpiece, 20MP selfie camera and accompanying sensors. It will measure 168.6×72.6×7.9mm in its unfolded state and 90.8×72.6x16mm when folded.

The big new addition comes in the update 48MP primary camera which sits below the secondary 2.7-inch OLED display. It boasts an f/1.7 aperture and OIS as well as a side-mounted LED flash. The second big change is the Snapdragon 765G chipset paired with 8GB RAM and 256GB storage. Also, the fingerprint sensor now resides on the phone’s back.