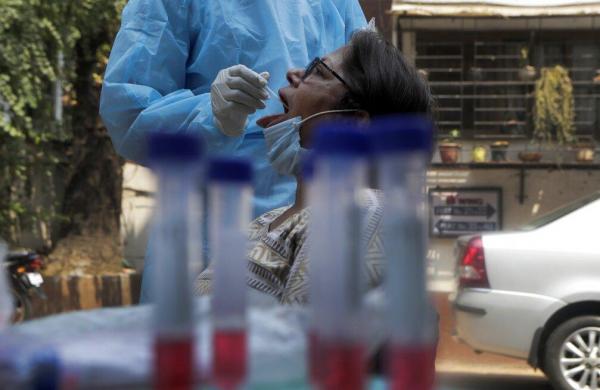 By PTI
MUMBAI: Maharashtra reported more than 8,000 new COVID-19 cases on the fourth straight day on Saturday which took the caseload in the state to 21,46,777, a health official said.

The death toll in the state due to the pandemic reached 52,092, the official added.

Lockdown in eastern Maharashtra’s Amravati city was extended by one week.

These cities in Maharashtra’s Vidarbha region have reported a spike in the cases of COVID-19 in the last one week.

Amravati district collector Shailesh Naval ordered extension of the lockdown in Amravati and Achalpur cities for a week, and also imposed restrictions in Anjangaon Surji town.

Amravati, Achalpur and places adjoining these two cities and the entire Anjangaon Surji town will remain under lockdown till 6 am on March 8, he said.

People can step out to buy essential commodities between 8 am and 3 pm, Naval said.

The industries permitted to operate earlier would continue to operate.

Hotels would be allowed to provide parcel service while vegetable markets would be open for retailers between 2 am and 6 am.

School and college examinations will be conducted as per the schedule, the collector said.

In Yavatmal, the administration imposed a complete curfew for 40 hours, starting at 5 pm Saturday.

Lockdown is also in force for Saturday and Sunday in Nagpur and Buldhana.

On Friday, 8,333 new coronavirus cases were reported in the state.

Four cities – Mumbai, Pune, Nagpur and Amravati — together accounted for 3,401 or 40 per cent of new cases.

Maharashtra energy minister and guardian minister of Nagpur district Dr Nitin Raut warned of tougher steps if the rise in cases did not come under control.

“Saving people’s lives is our duty and we are ready to initiate all necessary steps for it,” he said, appealing people to maintain social distance and wear masks.

Weekend lockdown is also in place in Nagpur, Buldhana and Yavatmal in the region.

“The virus has now spread to most of the cities and districts. For instances, in Akola division which today reported 1,364 cases, all its parts including Akola district, Akola city, Amravati district and city, Yavatmal, Buldhana and Washim have reported coronavirus infections in three digits,” the official said.

The Mumbai division overall reported 1,823 new cases, which took its caseload to 7,23,995 while eight deaths in the region pushed the fatality count to 19,816.

As many as 3,648 coronavirus patients were discharged from hospitals on Saturday, taking the tally of recoveries to 20,20,951.

Of 51 deaths reported during the day, 27 deaths had taken place in the last 48 hours and 19 in the last one week.

Remaining five deaths had taken place even before that, the official said.

As many as 3,084 persons are in institutional quarantine in the state.

Some coaching classes to remain shut in Aurangabad

In view of the rise in new coronavirus positive cases in Aurangabad city in Maharashtra, the civic body on Saturday ordered closure of tuitions for classes 5 to 9 and for class 11 till March 15, a senior official said.

The order to shut down these classes was passed by civic commissioner Astik Kumar Pandey in a bid to avoid gathering of students at the coaching institutes, he said, adding that online coaching is allowed.

However, coaching for classes 10 and 12 is allowed to continue with necessary precautions in view of forthcoming exams.