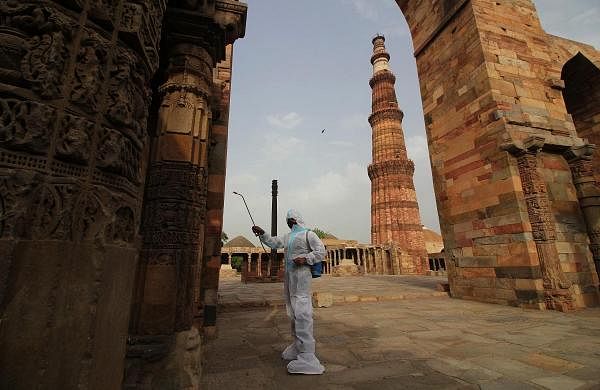 NEW DELHI: With sudden rise in positive Covid cases, the Archeology Survey of India (ASI) on Thursday decided to shut all its monuments, museums, and protected sites in states including Delhi and Bihar for about two weeks as a precautionary measure and to prevent spreading of infection.

The centrally protected heritage sites including Red Fort, Qutub Minar and Humayun’s tomb in the national capital will remain out of bounds of visitors till January 20. However, the historical sites under the jurisdiction of ASI will be closed till January 21.

In Delhi, there are about 170 historical structures with ASI and only 13 such as Red Fort, Humayun’s Tomb, Qutub Minar, Safdar Jung’s Tomb, Purana Quila, and Hauz Khas have paid entry. Red Fort, Qutub Minar, and Humayun’s Tomb are among the most visited sites in the city as they receive approximately 10,000 visitors every day.

NK Pathak, director (monument) on Thursday issued a series of orders for closure of sites in states in accordance with the directions of the local administration.

All protected monuments and heritage sites in West Bengal have been closed till January 15.

Similarly, buildings of historical importance maintained by the ASI in Tamil Nadu on January 9 but Mamallapuram and Tiger Headed Caves will be shut for three days starting Friday (January 7).

Karnataka’s monument will be closed during weekend curfew between –January 8 and 16.

“All the directives or standard operating procedures (SoPs) issued by the state or district administration shall be scrupulously adhered to in the matter,” said the orders.

The ASI manages and protects 3,691 monuments including 143 are ticketed sites in the country.

To curtail health risks posed by the coronavirus, all ASI sites were also closed first in March 2020 and later in April 2021 with the advent of the second wave of Covid.