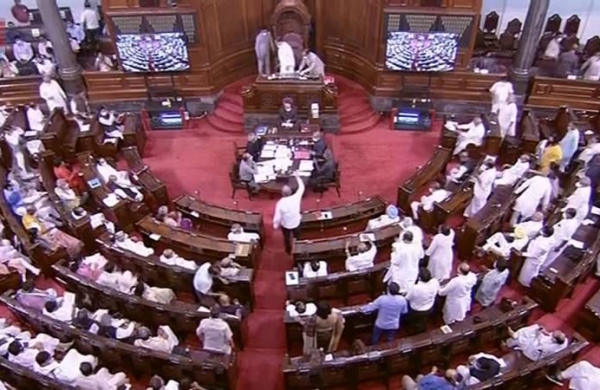 By PTI
NEW DELHI: Rajya Sabha proceedings were on Monday adjourned for almost an hour after opposition parties continued their protests over various issues including snoop gate and farm laws.

MPs belonging to the Congress, Trinamool Congress (TMC) and other opposition parties rushed into the well of the House raising slogans against the government.

“We are becoming helpless day by day,” he said before adjourning the proceedings till 12 noon.

The Lok Sabha also witnessed disruptions by opposition members and was adjourned till 2 PM.

Soon after the Upper House paid glowing tributes to the martyrs of the Kargil war and congratulated Mirabai Chanu for winning a silver medal in Tokyo Olympics, slogan-shouting opposition members trooped into the well of the House.

Amid a din, Naidu said he has not allowed notices under rule 267 by opposition leaders including from Mallikarjun Kharge and K C Venugopal (both Congress), Tiruchi Siva (DMK), TMC’s Sukhendu Sekhar Ray, Elamaram Kareen (CPI) and others as the issues they want to raise are being discussed in the normal course of time.

Rule 267 provides for setting aside of the business of the day to take up discussion on the issue being sought to be raised.

Naidu did not mention the issues the MPs wanted to raise under rule 267.

He said important public interest issues have been allowed to be raised through zero hour and special mention but “the house is not able to perform its duty. Members they are denied an opportunity.”

“We are becoming helpless day by day,” he said.

Since the start of the monsoon session of Parliament last week, zero-hour mentions which members could not raise because of disruption pertained to wide-ranging issues including Covid vaccine, need for time-bound completion of Covid vaccination, unemployment due to the pandemic, problems of students availing higher education, hike in petroleum product prices, freedom of the press, killings of Indians in South Africa and sharing of Cauvery waters between states.

“All these important issues could not be discussed because of this situation,” he said, referring to the disruption being caused by the opposition MPs.

“We are becoming helpless. People should know what are the important issues admitted, members were present, they want to speak but they were not permitted by few.”

Soon after he adjourned the proceedings till 12 noon.