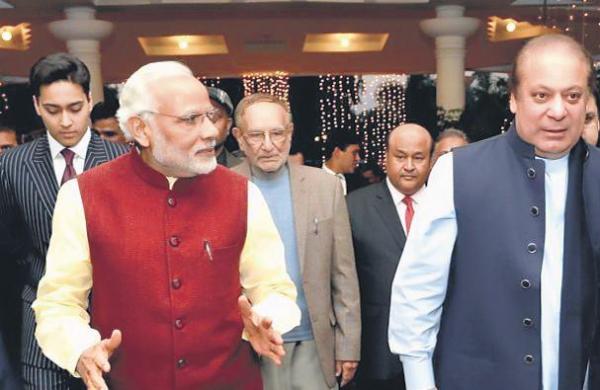 Express News Service
NEW DELHI: In his recently-released autobiography, Pranab Mukherjee has termed Prime Minister Narendra Modi’s unscheduled stopover in Lahore in 2015 to meet the then Pakistan Premier Nawaz Sharif as “unnecessary and uncalled for”, but at the same time the former President has praised Modi for being quick in picking up the nuances of foreign policy.

“I personally feel that PM Modi’s stopover in Lahore was unnecessary and uncalled for, given the conditions that prevailed in India-Pakistan relations,” he wrote. The fourth edition of The Presidential Years: 2012-2017 was released on Tuesday after its final draft was approved by Mukherjee before his death in August 2020.

The former president also disapproved of Modi playing up his personal friendship with global leaders. “I totally oppose the expressions of personal friendships (Abe called Modi his most dependable friend), because friendships are between countries. I do not subscribe to the belief that such special friendships have any worth when it comes to international relationships, where every relationship is impersonal,” Mukherjee said in the book.

Elaborating the point, he says his friendship with Bangladesh was completely political but his ties with PM Sheikh Hasina during her time in exile were personal. “Personally, I believe that PM Modi plays up personal equations too much. To take such relationships as true is a bit absurd,” he wrote. However, he heaped praise on Modi for being quick to understand the nuances of foreign policy despite “absolutely no experience” in foreign affairs. “Foreign policy was a truly unchartered territory for him.

But he did what no PM had attempted before: invite the heads of State of SAARC nations to his oath-taking ceremony. His out-of-the-box initiative took many foreign policy veterans by surprise. I felt that the gesture of inviting the neighbouring countries was a good one and that if we could keep up this momentum, we could have vastly improved ties with our neighbours,” the former president wrote.On ties with Pakistan, Mukherjee said the main difficulty was the negative thoughts that Islamabad continues to harbour against India.

The former president also said he wouldn’t refer to Pakistan as an enemy country. “No country is an enemy unless we are at war with it.” Mukherjee has also said that it’s the responsibility of both India and China to ensure that a Doklam-like situation is not created.