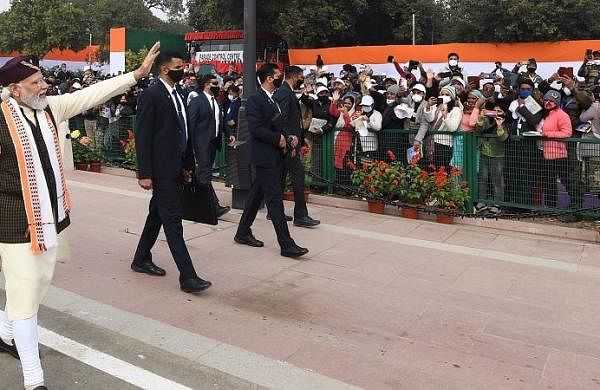 DEHRADUN: Prime Minister Narendra Modi on Wednesday struck an emotional chord with the people of poll-bound Uttarakhand by wearing an Uttarakhandi cap at the Republic Day function in Delhi.

Manufactured at SOHAM Himalayan Centre, Mussoorie, the cap worn by Modi remained the talk of the town throughout the day with political leaders interpreting it as a warm gesture of the Prime Minister to the people of the state which goes to polls on February 14.

“We are grateful to the Prime Minister. By wearing an Uttarakhandi cap at Rajpath he has honoured every citizen of the state. It is a proud moment for every Uttarakhandi,” Chief Minister Pushkar Singh Dhami said.

“This is the reason why Modi ji lives in the hearts of the people of Uttarakhand.

It also shows that vocal for local is not just a slogan for the Prime Minister but a commitment,” Joshi said.

He also congratulated Samir and his entire team of artisans at Soham Himalayan Centre for making the cap.

Political commentators said such emotional gestures do produce an impact on the voters but the problem is all parties are doing it.

“With the corona curbs still in place, large rallies are not being held.

Maybe the Prime Minister is trying to make up for that through this kind of symbolism.

But then all political parties are doing that to add a sentimental quotient to their campaign,” political observer Jaisingh Rawat said.

“In a situation like this, it will have to be seen which party’s gesture touches more hearts,” Rawat said.

“Modi never misses an opportunity to strike an emotional chord with people.

He always begins his speech at the rallies in the local dialect, be it in Himachal Pradesh or the Kumaon or Garhwal regions of Uttarakhand,” he said.

The state’s Congress party leaders, however, dismissed the PM’s gesture of wearing the Uttrakhandi cap during the Republic Day function at Rajpath as “just a poll gimmick”.

It is just an electoral stunt,” he added.