Modi government will give subsidy on sugar exports, gift to 5 crore sugarcane farmers 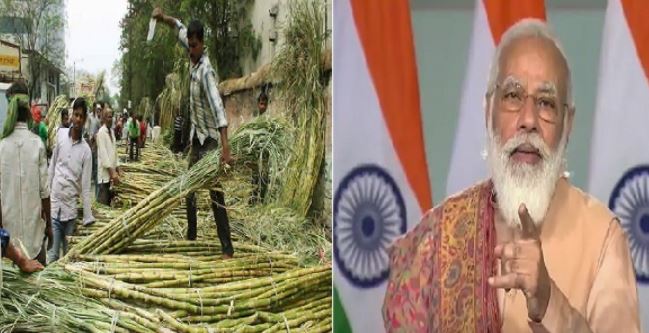 In the midst of the ongoing agitation on the issue of agricultural law, the Modi cabinet has taken a big decision on Wednesday. The government has decided to export 6 million tonnes of sugar, the proceeds from this, its subsidy will be directly deposited in the account of 5 crore farmers. After the cabinet meeting, Union Minister Prakash Javadekar, Ravi Shankar Prasad informed about the decisions by holding a press conference.

The Union Minister said that this year the government has decided to give subsidy on the export of 6 million tonnes of sugar. Subsidies will be directly in farmers’ account, it will cost 3500 crores. Apart from this, income of Rs 18000 crore will also be given to the farmers.

The Union Minister said that 5 crore farmers will benefit from this, 5 lakh laborers will benefit. According to the minister, within a week, farmers will get subsidy of up to Rs 5000 crore. 60 lakh tonnes of sugar will be exported at the rate of 6 thousand rupees per ton.

According to Prakash Javadekar, sugar production will be 310 lakh tonnes this year, the consumption of the country is 260 lakh tonnes. Due to the low sugar prices, farmers and industry are in trouble, to overcome this, it has been decided to export 6 million tonnes of sugar and subsidize the exports.