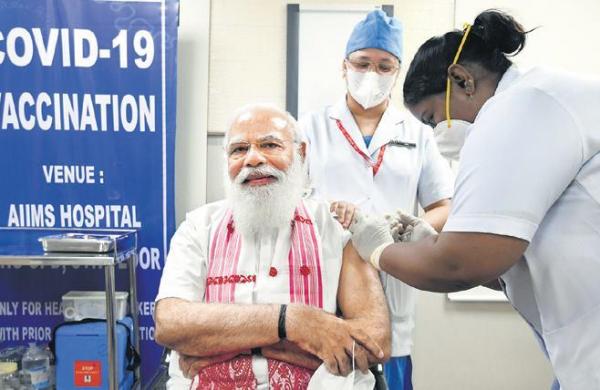 By Express News Service
NEW DELHI: On a day the nationwide Covid-19 vaccination drive opened for people above 60 and those between 45-59 years with specific comorbidities, Prime Minister Narendra Modi was the first one to take the jab at the AII India Institute of Medical Sciences here.

Glitches in the CoWIN platform, which has been designed to drive the initiative, meant that most of those who wanted to register for inoculation could not do so. However, over 1.47 lakh citizens in the new category of beneficiaries still managed to take the shots on the first day of the second phase of the vaccination drive.

The health ministry later said the CoWIN app was meant for use only by the administrators and that the registration for vaccination has to be done through the portal. “Registration and booking for appointment for #COVID19 vaccination is to be done through #CoWIN Portal:www.cowin.gov.in. There is no #CoWIN App for beneficiary registration. The App on Play Store is for administrators only,” the ministry tweeted.

About 4.27 lakh jabs were administered on Monday, 65% of whose beneficiaries were healthcare and frontline workers, who are being covered from before. Among the general citizens who were inoculated on Monday, 1,28,630 were in the elderly category while 18,850 were those under 45 with comorbidities.

Though the government did not specify it, sources said most of the jabs in this category were through walk-in facilities. The Centre, however, did not make public the state-wise breakup of the vaccination figures for the day. It also did not share the break up of vaccinations carried out in government and private facilities.

Over 29 lakh potential beneficiaries registered on the CoWIN portal on Monday. Of them, about 26 lakh are citizens while the rest are healthcare and frontline workers. About 6.44 lakh appointments were booked by citizen beneficiaries. The total vaccination count in the country stood at 1,47,28,569 on Monday as per the provisional reports. They include 66,95,665 healthcare workers who took the first dose and 25,57,837 healthcare workers who took the second shot.