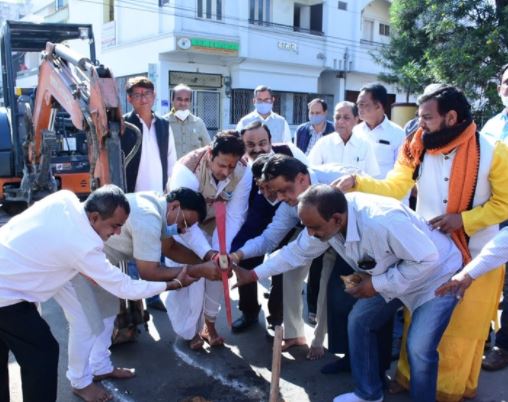 Parliamentarian Secretary and MLA Vikas Upadhyay performed Bhoomi Pujan for beautification of Rohinipuram pond after various construction works of Raipur West Assembly constituency were included in the Bhoomi Poojan program. During this, he said in his address on the stage among all the public representatives of the capital that in the area, according to the general public and by asking them, they will do their desired development. It is my resolve to honor the people who have made me worth speaking on this platform.

Vikas Upadhyay summoned the Rohinipuram pond beautification contractor to the public in clear words on the stage and instructed them not to act in an arbitrary manner and work with high quality on the advice of the residents by pasting the entire work plan. MLA Vikas Upadhyay, after attending religious programs on Friday morning, performed bhumi pujan for the construction work of two roads near Hirapur, Jarvayi water tank, near Tatappandha near Ayyappa temple and near Bharatmata school. After this, Bhumi Pujan was done to provide this facility under the Amrit Jal Mission to solve the years old water problem of the residents of Samta Colony settled on 11 acres. After this, he participated in the Bhoomi Poojan program to do development work of 72 lakhs for beautification work of Rohinipuram pond. Raipur MP Sunil Soni was present as the chief guest at the event held in Rohinipuram, while Vikas Upadhyay presided over the program.