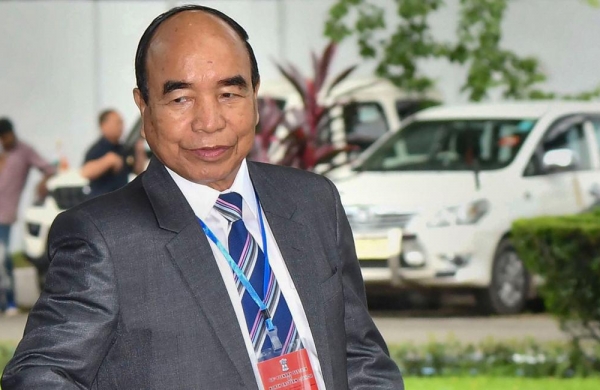 Express News Service
GUWAHATI: The Mizoram government will withdraw the FIR lodged against Assam Chief Minister Himanta Biswa Sarma in connection with the July 26 incident on the interstate border that left six Assam Police personnel dead and scores others injured.

Mizoram Chief Secretary Lalnunmawia Chuaungo on Sunday said the government would “relook” at the FIR lodged against the Assam CM.

Apart from Sarma, four police officers and two administrative officers from Assam were named in the FIR. They were asked to depose before the investigating officer at Mizoram’s Vairengte police station on Sunday.

The Mizoram chief secretary said Zoramthanga had suggested a relook at the FIR. He said after consulting the police officer concerned, Sarma’s name would be removed from the FIR if there were no “legal hitches”.

The Assam CM said he would not mind his arrest if that solved the border problem.

“I have to protect my officers. I will not allow my officers to be arrested or taken away. We will not accept that notice (summons to six officers by Mizoram Police). But if a notice is issued to me, I will go to Vairengte and join the investigation,” Sarma told journalists in Guwahati.

He continued: “I will say if my arrest solves the problem, why not arrest me today itself. I am not going to seek interim bail from the Gauhati High Court. But we will not allow our officers to be investigated when the place of occurrence is within the state of Assam.”

He reiterated that the July 26 incident be investigated by a third party – the National Investigation Agency or a central government agency. He said the probe was needed as six persons had lost their lives and their families might want to know the truth – what exactly happened on that fateful day.

Sarma also said it would be better if there was a decision on the border disputes on how the two states should live in the future. He said the Centre could take the lead in this regard. At the same time, he stressed on dialogues.

“Our main focus is on keeping the spirit of North-East alive. What happened along the Assam-Mizoram border is unacceptable to the people of both states. Honble CM @ZoramthangaCM had promised to call me post his quarantine. Border disputes can only be resolved through discussion,” Sarma tweeted.

Zoramthanga said he had discussed the issue with Union Home Minister Amit Shah and Sarma over the phone on Sunday.

“As per telephonic discussion with Union Home Minister and Assam Chief Minister, we agreed to resolve the Mizoram-Assam border issue amicably through meaningful dialogue,” he tweeted.

He requested the people of Mizoram to avoid posting sensitive messages and make judicious use of the social media platform in order to prevent any possible escalation of the situation. Later, he deleted the tweet.

Chuaungo said the state government had taken up the issue of blockade in Assam, which choked supplies to Mizoram, with the Ministry of Home Affairs (MHA). He was confident the MHA would be able to convince the Assam government to lift the blockade.

It was imposed by some organisations in Assam’s Cachar and Hailakandi districts. Mizoram relies on supplies that come through National Highway 306.