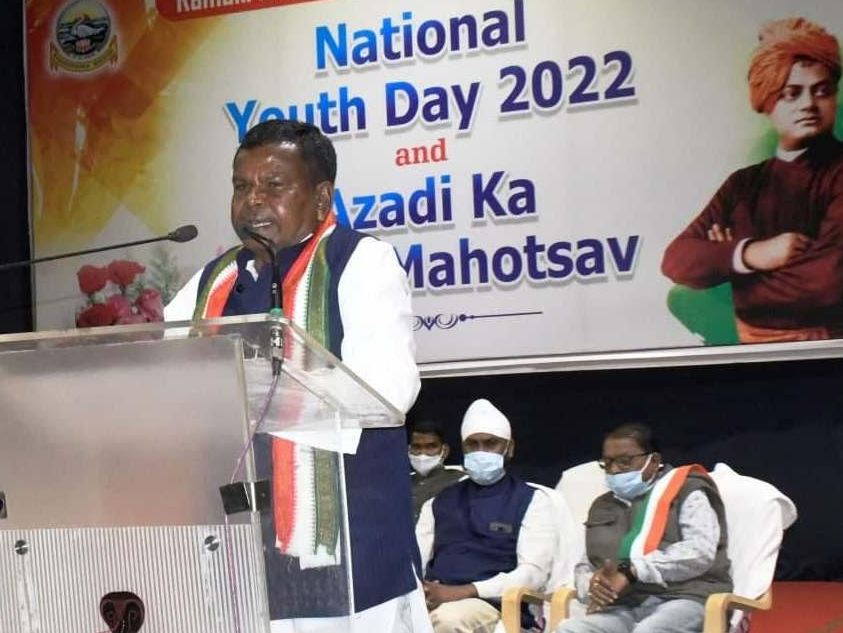 State Industries Minister and Minister in-charge of Narayanpur district, Shri Kawasi Lakhma participated in the National Youth Day and Amrit Mahotsav of Independence organized at Ramakrishna Mission Ashram today. He called upon the youth to contribute their cent percent in taking the state and the district to greater heights. During this, Minister Mr. Lakhma also interacted with the students. Industry Minister Mr. Lakhma while addressing the program said that the state government is doing all possible help to advance the youth. Swami Atmanand English Medium School has been established in every district of the state to provide good education to the youth. Along with this, it is also operating various schemes to advance youth in the fields of sports, education etc. On the other hand, Handicrafts Development Board President and MLA Mr. Chandan Kashyap while addressing the program said that we all together have to carry forward the ideas of Swami Vivekananda. Swami Ji’s ideals and the path of patriotism have to make his birthday a success. While addressing the National Youth Day program, Secretary of Ramakrishna Mission Ashram Swami Vibhayanand Ji Maharaj said that today the whole country is standing with the youth. You all know that Ramakrishna Mission Ashram has been established in the district in the year 1984. This ashram was established for the better health and education of the people of Abujhmad. The children here are making invaluable contribution to the society by becoming a good human being by studying in the ashram. On this occasion MP Mr. Deepak Baij, District Panchayat President Mrs. Shyambati Netam, District Panchayat Vice President Mr. Devnath Usendi, Abujhmad Development Agency President Mrs. Kamli Lekam, Municipality President Mrs. Sunita Manjhi besides Collector Mr. Dharmesh Kumar Sahu, Superintendent of Police Mr. Girja Shankar Jaiswal. Apart from this, public representatives of the area and officials of various departments were present. Like this:Like Loading… Continue Reading