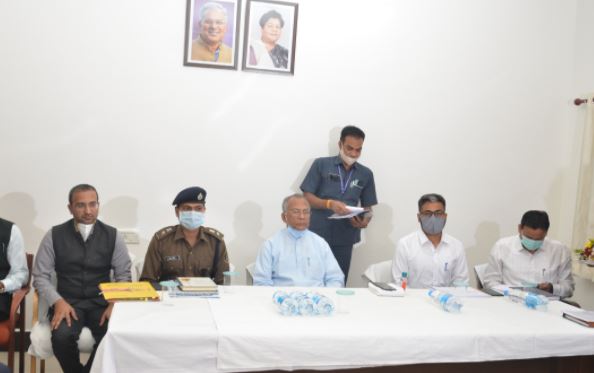 Public Works, Home, Jail, Religious Trust and Religion, Tourism Minister and Minister in-charge of Gariaband District, Mr. Tamradhwaj Sahu, took review meeting of departmental officers at Rajim Rest House today. During this, he reviewed various development works going on in the district. Minister Shri Sahu said that officers should work in such a way that public confidence in government is strengthened. Hearing of the poor, laborers and needy of the society should be ensured. Get all the work done at the right time. He reviewed the works according to the budget this year and directed to make proposals for the upcoming budget as well. All district officials including Collector Mr. Nilesh Kumar Kshirsagar, Superintendent of Police Mr. Bhojram Patel, District Panchayat CEO Mr. Chandrakant Verma were present in the meeting. .
Minister Shri Sahu said that the Gothanas of the district should be developed as multi-purpose and multi-purpose workplace. This will increase employment opportunities. Minister Shri Sahu has also instructed the agriculture department to change the crop cycle and make an action plan by making farmers aware in this direction. In review of Public Works Department, he said that he should give information about damaged bridges and culverts in the district so that the funds can be sanctioned immediately. If there are major works, then they will be included in the budget. Offer for renovation and asphaltization of roads. Minister Shri Sahu has given instructions to resolve cases of mutation, demarcation and demarcation on priority. During the review, instructions have been given to plant fruit trees on vacant land in each gram panchayats and reserve land in the name of sports ground. Instructions have also been given to plant trees along the road. The Food Department was informed on the instructions of transporting food grains to the identified areas that food grains have been transported in these areas for two months. In the review of the District Cooperative Bank, the farmers were given to make the payment through the bank Sakhi for easy payment of the amount. During the review of Tribal Development Department, it was told that there are 78 ashram hostels in the district. The Minister in-charge said that women officers should ensure surprise inspection in girls hostels. Also, health check-ups of girls should be ensured at regular intervals. In the meeting, District Panchayat CEO Mr. Chandrakant Verma gave information about progress of Narva, Garwa, Ghurwa, Bari and MNREGA schemes. He said that the district is included in the first five districts of the state under MGNREGA. Every day one lakh man days have been planned to create employment. Information was also given regarding land leveling. In a review by the Health Department, the CMHO was instructed to provide treatment under the Mukhyamantri Haat Bazaar Scheme in the district by setting up camps in inaccessible and inaccessible villages. Also, keeping in mind the protocol, said all the necessary precautions to pay special attention to mask, physical distancing.