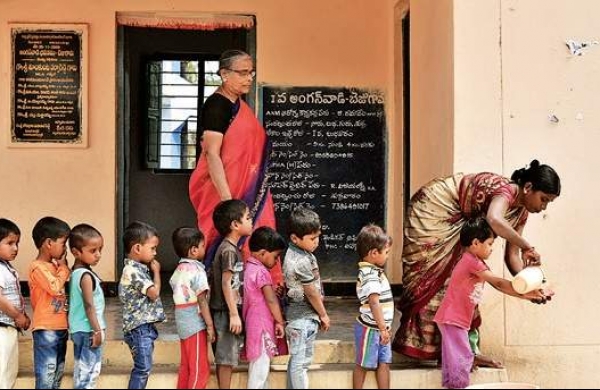 By Express News Service
BHOPAL: Milk will be served three days a week to children aged between three and six years in Anganwadis across Madhya Pradesh, the state cabinet meeting chaired by chief minister Shivraj Singh Chouhan decided on Tuesday.

According to the state government’s official statement, the cabinet decided to re-start the regular distribution of milk for 3 days in a week to children of Anganwadi centers in the 3 to 6 age group by the Madhya Pradesh Mid-Day Meal Programme Council (Panchayat and Rural Development Department) from January-2021.

In 2019, while there was a Congress government in power in MP, then women and child development minister Imarti Devi had mooted the idea of serving eggs to kids at Anganwadi centers, which had kicked up a political row in the state. In 2020, the Jyotiraditya Scindia loyalist minister Imarti Devi (who was then the WCD minister in Shivraj Singh Chouhan-led BJP government) had again rooted for serving eggs to kids at Anganwadis to fight malnutrition, but the idea was disapproved by the CM. Devi, just a few weeks later lost the assembly by-elections as BJP candidate.

The Cabinet also decided to implement the ‘Pradhan Mantri Matsya Sampada Yojana’ launched by the Central government under the Atmanirbhar Bharat campaign for the next 5 years (from 2020-21 to 2024-25) in the state. In the next 5 years, an amount of Rs 481.66 crore will be spent on integrated development and management of fisheries in the state.

Also, the cabinet decided to implement the National Animal Disease Control Program of the central government in the state as per the proposal received by the Animal Husbandry and Dairy Department.