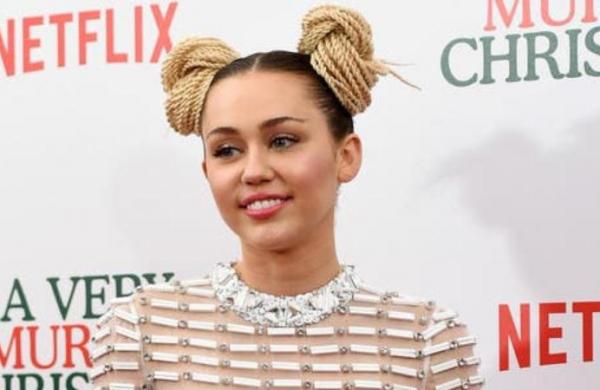 By ANI
WASHINGTON: Singer-songwriter Miley Cyrus is using COVID-19 as a source of inspiration, channeling her energy into making some fresh music. Miley recently dropped the music video of her track ‘Angels Like You’ and it features the singer urging everyone to get vaccinated amid the health crisis.

On Monday, the 28-year-old pop star released the official music video of the song. The footage for the song was recorded on Super Bowl Sunday back in February when Cyrus headlined the NFL TikTok Tailgate event in front of a limited audience of 7,5000 vaccinated, Florida-based healthcare workers.

Miley also shared the music video on her Instagram handle writing a lengthy caption along with it.

She wrote, “Angels Like You video OuT NoW! Shot on 2/7/21 at #TikTokTailgate, the first outdoor covid compliant concert of its size since the pandemic changed our lives forever.”

In the caption, she added, “I never would have thought when I wrote “Angels” that the first time I would be performing this song or shooting a music video would be in a time like this.”

“It’s been almost a year without live music. I desperately miss the connection it brings. I miss hearing your voices ring out in harmony with my own. I miss YOU. With vaccines becoming more available the dream of us all being reunited is getting closer to becoming a reality. We just have to do our part. I hope you love what I have made for you and that you feel for just these few minutes that you were here in the crowd at the show with us. Soon,” Miley concluded.

The clip, which the singer co-directed alongside Alana O’Herlihy, has Cyrus dressed in her Super Bowl pre-game concert look, with the glittery No. 25 black and pink jersey and shoulder pads she rocked during her TikTok Tailgate show in Florida for this year’s big game.

The footage of Cyrus lying in a field, chilling backstage and belting the tearjerker in front of a crowd was filmed on February 7, when Miley performed at the first major COVID-19-compliant live show since the start of the pandemic last March.

The video includes shots of the audience, which was made up of fully vaccinated, mask-wearing healthcare workers and other frontline workers. The music video concludes with a heartfelt message handwritten by the singer, in which she urges viewers to help prevent the spread of the virus.

The handwritten message read, “Nearly a year after the world shut down because of COVID-19, this video was shot at the first concert of its size since the pandemic changed our lives.”

She continued, “The audience here is fully vaccinated healthcare workers who have been fearlessly + tirelessly fighting COVID-19. We all look forward to being together again + this can happen sooner than we may have thought with vaccines becoming more available.” “Each of us can help stop the pandemic by being vaccinated. Together we can make the experience of live music a reality again,” added the songstress.

During her roughly 90-minute pre-game concert, which included surprise appearances by Billy Idol and Joan Jett, the singer repeatedly thanked health care and frontline workers in the audience and watching at home for all they had done during the global pandemic, reported Billboard.

“All of us have a purpose. My purpose is to sing on stage but my purpose can never be achieved without you, you are essential,” she said at one point.

On Super Bowl day, the singer expressed her gratitude for healthcare workers, at one point saying, “The dedication of this song could never repay you for your services.”