Men in uniform saved our lives: Survivors of Chamoli disaster grateful for new lease of life 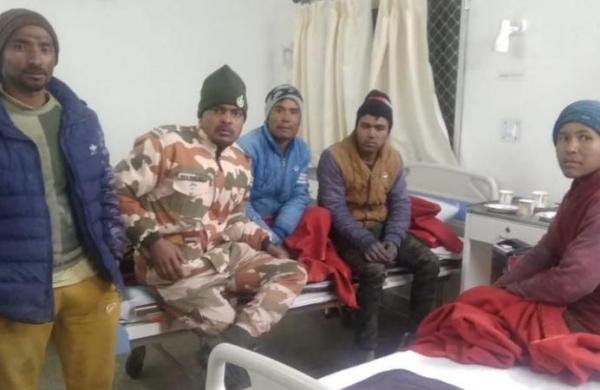 Express News Service
DEHRADUN: K Sriniwas Reddy, a geologist from Hyderabad who is among the lucky 12 to be rescued by the Indo-Tibetan Border Police on Sunday believes he got a new lease of life.

“I feel blessed as I am safe now. I thank these brave men and God for saving my life. I thought that we are not going to survive this,” says Reddy.

“When we finally reached the mouth of the tunnel, we realised it was completely blocked. The light was coming in through a small opening and a colleague of ours got some mobile network. We managed to call our officers and were finally saved by the ITBP,” added Reddy.

It took an operation of over 6 hours to get these men out of the tunnel which was filled up with water.

“Luckily, we were towards higher end of the tunnel. A sudden gush of water was followed after a thundering noise. Before we could understand, we were knee-deep in water and muck rising. We just ran towards end of the tunnel. One of us acted as there was still network in his phone,” recalls Suraj, one of the workers who is admitted in ITBP hospital in Joshimath, 15 kms from Tapovan, the site of the major damages.

Birendra Kumar (50), senior foreman working the project acted quickly and called up his general manager to save 12 lives including his.

The Dhak village resident said, “We were all panicking and suddenly in the midst of all that, we felt the vibrations of my phone. I didn’t think much. I called my boss Rakesh Dimri and told him that we were trapped in a tunnel. He informed the authorities and the men in uniform saved our lives. We all thank them. They are our Gods.”

Sanjay Kumar, deputy commandant of the First Battalion of the ITBP who led the operation told The New Indian Express, “Once we got the information, our teams moved ahead with the task. We just wanted to save those men at any cost. It took over 7 hours because we learned that the usage of heavy machinery might hurt them. So we dug slowly and even used our hands.”

In a bid to save the men trapped in the tunnel, the ITBP used ropes, pulleys, carabiners and spades to descend into the muck.

Out of 12 rescued from the tunnel, four are residents of Nepal.

Sant Bahadur, a resident of Kanchanpur district of Nepal said, “Finally, we will be able to see our families. We thought that this was our end. These people saved us. We will now go back to our homes, first thing.”

Out of other survivors who are recovering in various medical centers including an ITBP hospital, many are still in shock.

“Their mind is still coping with the shock and trauma the disaster caused to them. We are doing everything we can to make them healthy soon,” said a doctor from one of the medical centers.