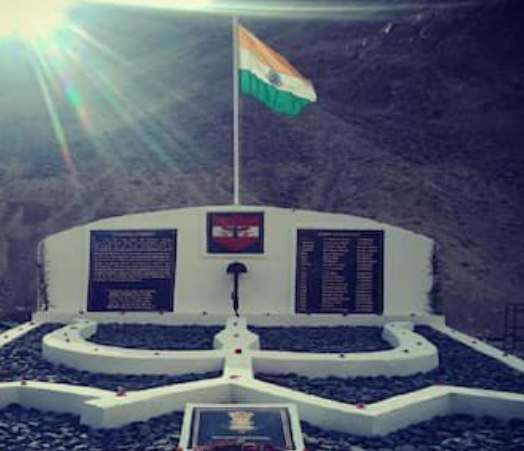 A memorial has been erected to commemorate the martyrdom of 20 Indian Army soldiers who were martyred in the Galvan Valley amidst the ongoing deadlock with China. Let me tell you that on June 15 this year, 20 soldiers of Bihar Regiment were killed in violent clash between China and India along the Line of Actual Control. This memorial is built close to Eru-120 post. This post is with the strategically important Derbuk-Shyok-Daulat Beg Oldi and Ladakh. The names of all those 20 soldiers who were martyred in violent clashes are inscribed on this memorial. These soldiers were martyred near the Y-Junction area under Operation Snow Leopard.

On 15 June 2020, the commanding officer of the 16 Bihar Regiment in Galvan Valley, Colonel B Santosh Babu, led the Quick Reaction Force and fellow soldiers carried out the PLP OP, according to Operation Detail’s on the memorial.

Explain that between India and China, tension has remained in Ladakh since May 5. On the intervening night of June 15-16 in the Galvan Valley of Ladakh, this conflict between the two countries turned into a violent skirmish, in which 20 soldiers of India were martyred. China also suffered a lot in this. Many military and diplomatic level talks also took place between the two countries since the start of the conflict. After which both countries have agreed to rear their forces. Let us tell you that this was the biggest incident of violence in 45 years on the border. Significantly, the order of dialogue between the two countries is also going on. India and China recently held another round of diplomatic talks on the border dispute in eastern Ladakh.

Both countries insisted on implementing decisions taken in the sixth round of military talks to avoid misunderstandings and to maintain stability on the ground. Diplomats from both countries held another round of digital talks under the framework of the Executive Mechanism (WMCC) for consultation and coordination on border matters, but it is believed that there is no concrete dialogue to speed up the process of resolving the deadlock. The result did not yield and both sides agreed to continue the negotiation process.