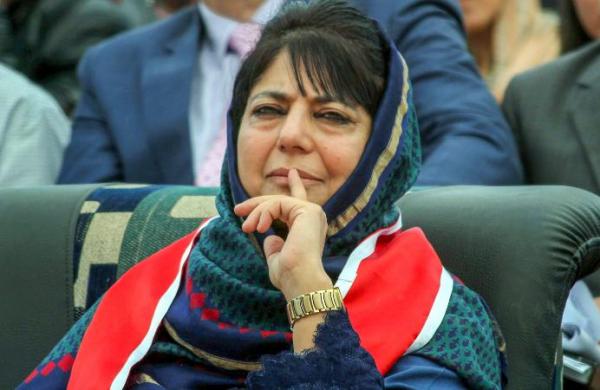 By PTI
SRINAGAR: PDP president Mehbooba Mufti on Sunday advocated a “peaceful struggle” for the “restoration” of democratic and constitutional rights of the people of Jammu and Kashmir.

Addressing a convention of senior party workers of Pulwama district in south Kashmir, Mufti said the people of Kashmir should not let despair decide their destiny, but rather strengthen their resolve, unify their ranks and “articulate their pain vociferously”.

Mufti claimed more youngsters were joining militancy, emphasizing that gun was no solution to any problem.

“We should always keep peaceful means as our lodestar and not lose sight of the fact that there are elements who wish to bracket us as violent and extremist so as to delegitimise our aspirations and our struggle,” she said.

Mufti pointed out how farmers mobilised and successfully rallied the whole world behind their cause, saying the discipline underpinning the movement was something worth emulating.

“Apart from robbing us of our constitutional rights, we have witnessed the loot of our resources and our economy being crushed,” the PDP leader said.

The horticulture sector, which forms the backbone of the Valley’s economy, has not been spared either, she alleged.

“By allowing apple produce from Iran to flood the market and our own crop destroyed by supply of spurious pesticides, the nefarious designs are being implemented. This also seems to be a part of the scripted scheme to pulverize our economy,” Mufti said.

The former chief minister said the need was to stand up in unison and struggle for rights, identity and the future of the coming generations.

Mufti reaffirmed that dialogue and reconciliation as envisioned by PDP founder Mufti Mohammad Sayeed was the only way to bring about peace and prosperity not only to the people of Jammu and Kashmir, but the whole of subcontinent.

Mehbooba Mufti said she would continue to advocate dialogue between India and Pakistan no matter how disliked the idea be with “some vested interests”.

“We have always advocated dialogue and reconciliation. No matter what they said till yesterday, today we see them only emulating our roadmap as inevitable. The recent joint statement of DGMOs of Indo-Pak armies is a case in point. We want them to take this forward to the highest levels and also engage with the people of Jammu & Kashmir constructively respecting their dignity,” she added.

Thanking the party workers for their unflinching support to the party, the PDP president lauded their efforts that culminated in a robust win for the party in the-recently concluded DDC elections in the district.

“Pulwama is the heartbeat of PDP and your unwavering support is the source of personal strength to me. And my first visit to your district after being re-elected as the party president is a reaffirmation of my love for you,” she said.