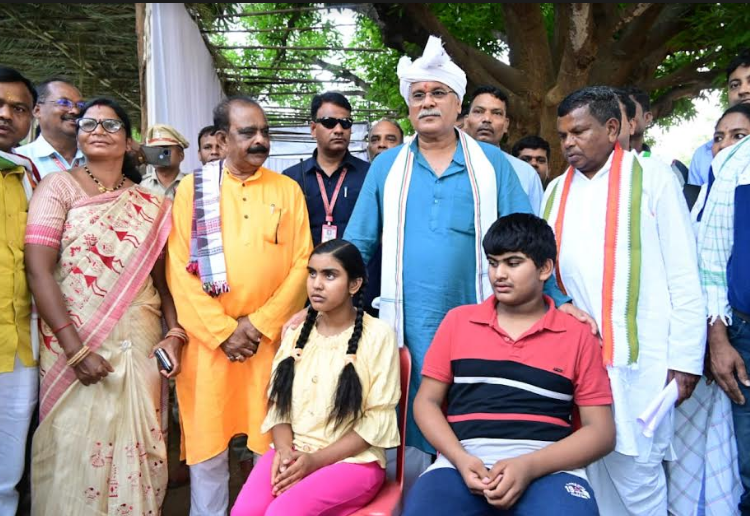 Chief Minister Bhupesh Baghel’s round of meeting with the general public is going on. After Surguja division, the Chief Minister is examining the accessibility of government schemes to the field level in Bastar division. Meanwhile, he is also listening to people’s sorrows and pains and solving their problems in minutes. Chief Minister Shri Baghel has also relaxed the rules to wipe the tears from the eyes of the people. The administration is also attentive and is providing assistance to the people immediately on the approval of the Chief Minister. In this episode, in the Bhainsgaon Gram Panchayat of Bastar Vidhan Sabha, the Chief Minister approved the assistance of three lakh rupees for the daughter Kumari Lokeshwari Baghel, who was listening in a crowd of thousands and for the help of the visually impaired brother-sister Bhanupriya and Khalendra’s father Shri Devendra Acharya in Bakwand. The sanctioned amount of Rs 1.50 lakh has been released immediately. For this, Chief Minister Mr. Bhupesh Baghel has also relaxed the rules with his voluntary grant. It is worth mentioning that during the meeting in Bhainsgaon Gram Panchayat, on May 25, Chief Minister Mr. Bhupesh Baghel also saw the crying daughter in the crowd. Lokeshwari, a resident of Gram Panchayat Kurushpal, was called by the Chief Minister to her, put her hand on her head and made her drink water. He told the Chief Minister that his father had died 15 years ago. Due to lack of home, he is forced to live with his widowed mother and brother at his maternal uncle’s place. Due to the bad financial condition, he and his brother are not able to study because the mother has to help in the household chores. Wiping the tears of the weeping Lokeshwari, the Chief Minister took immediate action and gave financial assistance of Rs 3 lakh to Lokeshwari. Help approved. Crying Lokeshwari returned home with a smile on her face and a gleam of faith in her eyes. Similarly, in the meeting held at Bakwand on May 25, the Chief Minister allowed a visually impaired student to buy smart phones and other equipment by accepting one and a half lakh rupees in her life. Filled with the light of knowledge. During the meeting, Bhanupriya Acharya, a visually impaired student of Sawara village, said that I want to study. The problem is due to poor financial condition. His visually impaired brother Khalendra also expressed his desire to learn music. For both, Bhanupriya demanded a smart phone and a tape recorder. The Chief Minister immediately announced to give one and a half lakh rupees for this. Like this:Like Loading… Continue Reading