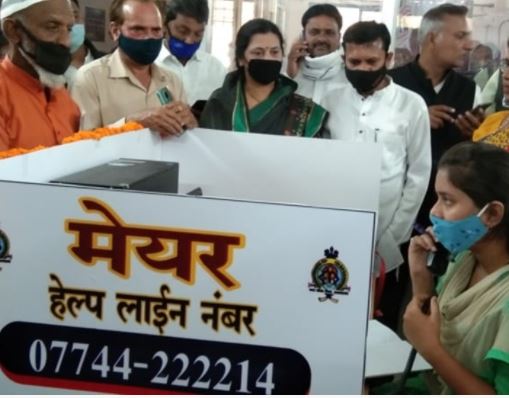 People of Rajnandgaon will not have to wander for any kind of work or problem related to Municipal Corporation. Officers will not have to go round. For this, the Mayor Helpline has been started. A complaint can be made by lodging it. Can inform about the problem related to electricity, water, sanitation etc. There will be a separate team to resolve the complaints lodged. Mayor Hema Deshmukh introduced the number.

The Mayor Helpline number has been started by the Municipal Corporation for quick redressal of the citizens’ problem, which was launched by Mayor Hema Sudesh Deshmukh on Saturday. The Mayor’s Help line number is 07744 222214. In this, citizens can make the administration aware of their basic problems like electricity, water, sanitation, etc. The Mayor informed that keeping in mind the convenience of the citizens of 51 wards of the Municipal Corporation Border Area, the Mayor Helpline number has been started.

Work will be done in the city development on the lines of Gadhbo Nava Rajnandgaon on the lines of Gadhbo Nava Chhattisgarh, as planned by Bhupesh Baghel. In this, work will be done keeping the convenience of citizens in mind. In the program, Mayor Hema and Municipal Commissioner Chandrakant Kaushik sent a book of the Corporations Act to all the councilors, so that they could become aware of the functioning of the municipal corporation.