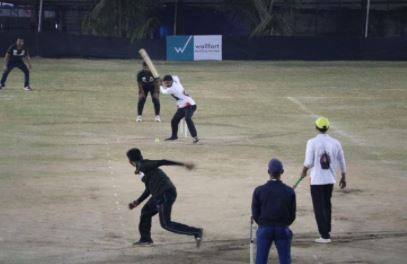 Under the aegis of Chhattisgarh Sports Congress 3 matches of the first leg were played on the fifth day of the Inderchand Dhariwal Smriti Congress Corporate League Cricket Competition. Organizer Khel Congress President Praveen Jain said that the first match of the day was played between Jai Ambe 11 and Rishabh Builders, winning the toss, Rishabh Builders decided to field first, Jai Ambe came out to bat first, losing 7 wickets in the scheduled 10 overs Only 65 runs were scored, in reply Rishabh Builders got the target in 5 overs and won the match by 10 wickets, the man of the match being Nilesh who scored 41 runs from 18 balls. The second match of the day was played between the Anti Corruption Bureau and CG Dial 112, winning the toss and the Anti Corruption Bureau decided to field, the batsmen of CG Dial 112 came out to bat first, losing 6 wickets and scoring a big score of 123 runs in 10 overs. Atis, who scored the highest score, scored 26 runs off 9 balls, the Anti Corruption Bureau team chased down the target, scoring only 63 runs, the man of the match Atish was selected. The third and final match of the day was played between the teams of Raipur Mayor 11 and Raipur Police Range, Mayor 11 captain Mayor Ejaz Dhebar decided to bat first after winning the toss and losing the tournament for 7 wickets in 10 overs. In which Irfan made a brilliant 71 off 25 balls with the help of 6 sixes and 7 fours, Mayor Ejaz Dhebar also took 2 wickets in the bowling, chasing the target Raipur Super Cop’s team at the loss of 6 wickets Only 113 runs were scored. Irfan was adjudged Man of the Match.