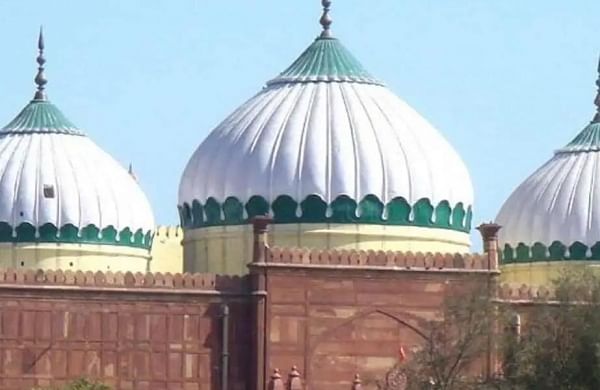 MATHURA: An additional district judge here on Thursday directed a lower court for speedy disposal of a plea for appointing a court commissioner to survey the Shahi Idgah mosque and verify the claims of temple’s signs in it.

The petitioners moved the court of additional district judge with a revision application after the lower court of civil judge (senior division) on May 23 asked Shahi Idgah mosque’s management committee and others to file their objections to a plea seeking survey of the mosque and fixed July 1 as the next date of hearing on the reopening of courts after summer vacation.

“Revision application was disposed of with the direction for the lower court to dispose of the plea regarding sending an advocate commissioner to the mosque on a day-to-day basis from next hearing,” District Government Counsel Sanjai Gaur said.

Rajendra Maheshwari, the counsel for the petitioners of the suit, said, “Lower court of civil judge (senior division) has also been directed by Additional District Judge Sanjai Chaudhari (in-charge district judge for appeal and revision) not to delay hearing of the application pertaining to sending an advocate commissioner (to mosque). The application was submitted by Delhi-based Jai Bhagwan Goyal and four others.”

The petitioners had filed an application in the court of Civil Judge (senior division) Jyoti Singh on May 23 for sending an advocate commissioner to survey Shahi Idgah Masjid complex claiming presence of temple marks in the mosque, Maheshwari said.

The court instead of disposing of the application filed under urgency clause, had set July 1 for next date of hearing, the petitioners’ counsel said.

Aggrieved by the decision, the petitioners moved a revision application against the order of civil judge (senior division) in the court of District Judge Mathura, who transferred the application in the court of ADJ (7th) on Thursday, Maheshwari said.

In the revision application, the order of lower court was termed defective since the urgency clause mentioned in the application was not considered, the counsel said.

The lower court is hearing a bunch of suits for the removal of Shahi Idgah Masjid from near the Krishna Janmabhoomi temple in the Katra Keshav Dev Temple complex and subsequent interim applications for appointing a court commissioner to survey the mosque.

The petitioners have sought the mosque’s survey, claiming the existence of several signs of temples, like those of “om, swastika and lotus” inside it besides its alleged “Hindu architecture”.

The pleas have been filed by deity Thakur Keshav Dev Ji Maharaj virajman (in-situ) in its capacity as a juristic person, represented by advocates Mahendra Pratap Singh and Rajendra Maheshwari as its “next friend”, among others.

The suits filed by Singh and others in December 2020 list Shahi Idgah Masjid’s Intezamia committee’s secretary, president/chairman of the UP Sunni Central Waqf Board, Srikrishna Janmasthan Seva Sansthan’s secretary and Sri Krishna Janmabhoomi Trust as respondents.