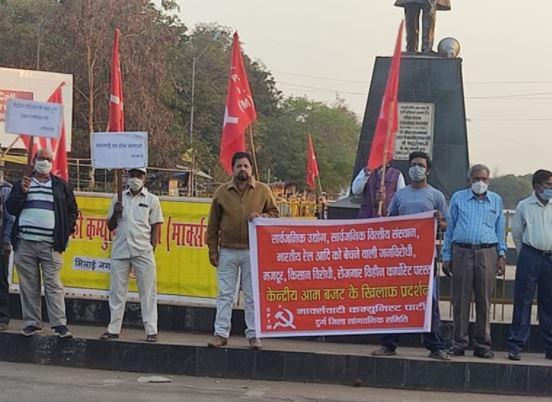 The Communist Party (Marxist) Durg District Committee demonstrated against the general budget. Anti-government slogans were raised during protests against the Union General Budget at JP Chowk in Bhilai. The party has termed this budget as anti-people, anti-worker-farmer and anti-public industry-financial institution, without employment, Union Budget.

The party says that the general budget is a relief to the public, corporate profits giving maximum benefit to the capitalists. This budget is not for the general public. And the revival of the sinking economy will work. This budget is a budget to make the rich richer and the poor poorer. The demonstration was addressed by lawyers Bharti, DVS Reddy, Sajjad Hussain and Shanta Kumar.

During the demonstration, speakers said that the budget, claiming to be self-sufficient, boosts the profits of carports through plunder of national property and large-scale privatization. The public sector LIC has been increased from 49 per cent to 74 per cent foreign investment and the FDI limit in the financial sector to increase corporate profits. At the same time, the matter of selling two nationalized companies has also come in this budget.