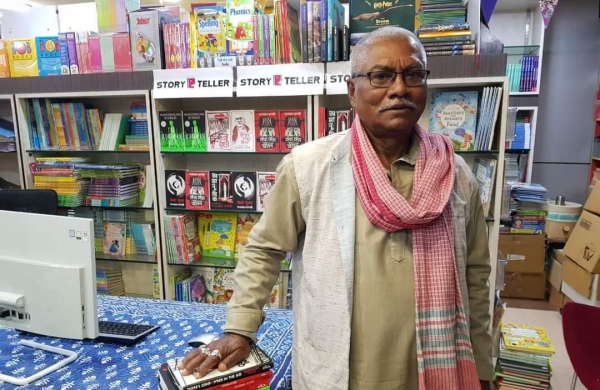 Online Desk
A gamcha on the neck and a side bag — that’s all he carries while walking kilometers on foot under the blazing summer sky. In his life of over 60 years, Manoranjan Byapari has donned many hats, but the gamcha has always been his companion.

He has been a rickshaw puller, a cook for 23 years, a daily-wage earner, a helper at a crematorium, an author. Now, he is a politician, contesting from the Balagarh seat in Hooghly district in these high-stakes Assembly elections on a Trinamool ticket.

One of the finest voices of Dalit literature, Byapari is a busy man. The campaign takes up most of his day and the only way to get him to sit down for an interview is at night, when the blazing speakers playing foot-thumping political anthems fall silent.

He has been writing for the people who live on the margins since the 80s, but now he says he wants to do something for them.

“I write. And all that I have done is written about people like me — the Dalits, the downtrodden, the everyday people. I have written about their pain and suffering but couldn’t do anything for them. This way maybe I’ll be able to do some work for their betterment,” he says, exuding confidence about his victory.

ALSO READ | Remixing songs, reinventing a party: How the Left is trying to draw Bengal’s millennials

One needs to be in a position of power to work for people. Perhaps, this election will give me that space, he adds.

However, this isn’t his first brush with politics. During the Naxalbari uprising in the late 1960s, Byapari, then a refugee from East Pakistan, actively took part in the movement. Later, he severed ties with the leaders of the movement and in his late 20s started pulling rickshaws for a living. It was a rickshaw ride that brought about a monumental change in Byapari’s life.

Acclaimed author Mahashweta Devi once boarded his rickshaw where a conversation led Byapari to publish an essay in her non-fiction magazine Bartika in 1981. When Rickshaw Chalai introduced Byapari as a writer to the world little did he know that in over three decades he would end up writing a dozen novels, short stories and essays.

Byapari himself is an embodiment of the ethos of Bengal, where rage, agony and political turmoil transcend into words, giving birth to literature. But the literary circles in Kolkata were never accommodating of his work until his novel Itibrittey Chandal Jibon Itibritte Chandal Jibon was translated to English in 2017. In the next few months, Byapari was attending every big lit fest in the country.

This was a time when Dalit writings and authors suffered were denied their space by the erudite upper-caste civil society members who dominated the city’s literature circuits. The then Left government’s ignorance of caste allowed powerful voices from the margins to be suppressed.

It has been different under Mamata Banerjee. The Chief Minister in 2020 set up a Dalit Literature Academy with Byapari at the helm of it. The committee will have representatives from other backward groups and communities, including Namasudra, Poudrakhastriya, Matua, Baghdi, Bauri, Dom, and Majhi, she had said.

Byapari’s anger with the Left government comes out clearly in his restless voice.

He says, “The Left was sitting on a sack of sand. Now it is impossible for them to get back on their feet. Different countries took Karl Marx’s ideologies and molded it according to the needs of their people. The Left in India didn’t. They never acknowledged caste. They thought class is the only thing they should focus on. Most of the people that held ranks in CPM were from the upper caste. They never understood that proletariats are mostly lower-caste people, who are subjected to inequality every day.”

“The only thing they did was to bring in land reforms and distribute lands to poor farmers. But later they snatched these farmlands from them as well. They lied through their teeth,” he rues.

The 2007 land agitation movement in Nandigram and Singur led by Trinamool supremo Mamata Banerjee brought an end to the 34-year-long rule of the Left government.

“The BJP lies too,” he continues.

“They have filled the air with hatred. The saffron party is systematically dividing people and pitting man against man. They have rendered people homeless in Assam. Was the NRC really necessary? Now they are trying to implement that across India. Most of the people who were disenfranchised belong to the lower rungs of society. They don’t have money to eat, where they will find papers to prove their citizenship. The people in Bengal should vote for TMC, or else the BJP will put them in detention camps,” he adds, while making his pitch.

Pointing out the atrocities against Dalits and women in BJP-ruled Uttar Pradesh, he argues that Yogi Adityanath has no right to speak of security in West Bengal when his own state is in tatters.

Recently, perhaps for the first time, in a bid to counter the BJP’s Hindutva card, Mamata Banerjee drew attention to her Brahmin roots at a time when her party has fielded over 90 SC/ST candidates for polls. Byapari, who has been vocal about his disgust towards caste oppression, makes what for him is an important distinction.

“I am not against Brahmins, I am against “Brahmawad”, “Manuwad”. From Mahasweta Devi to Mamata Banerjee, I can name 10 Brahmins who have helped me in my life. The fight is against the oppressors. The fight is to reclaim our identity,” he says.

Lashing out at BJP MP Santunu Thakur — the first namasudra lawmaker from the saffron camp — he says such people are enablers of oppression as they are hand-in-glove with the “Brahmin Baniya” party.

“What is the need for CAA when Mamata Banerjee has provided everything from voting rights to lands rights to the namasudras,” he asks.

The Trinamool in its manifesto promised OBC status to Mahisyas, Tamuls, Tilis and Sahas as recommended by the Mandal Commission. Earlier, after taking charge, Mamata had passed a key legislation providing 17 per cent reservation for OBCs in government jobs.

On the anger among the potato farmers in Hooghly, he says, “Mamata has tried to do a lot for the people. Look at all the schemes she has implemented to help the downtrodden. Maybe she has failed in some parts. She is still working on it. For the larger part, there has been a lack of cooperation from the Centre and a lack of funds. But she has worked for the people.”

It is on a note of hope that he ends. Despite the undeniable polarisation, Byapari believes the people of Balagarh will give him a chance and maybe if he succeeds, “it will inspire others to do more”.