Man who brought farmer agitation back from brink 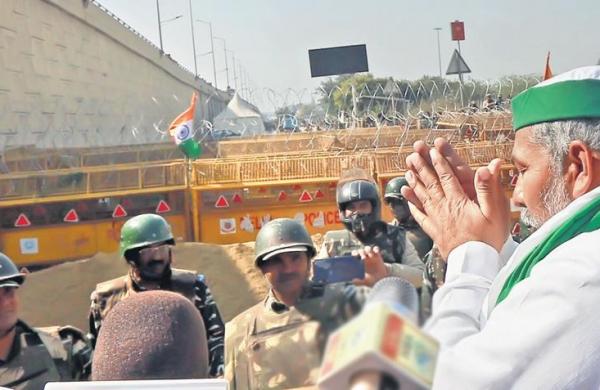 Express News Service
CHANDIGARH:  Rakesh Tikait, 51, resembles a meteor in the ongoing farmers’ agitation. The son of the legendary Mahendra Singh Tikait is a well known leader from western Uttar Pradesh. The agitation, which appeared to be ebbing post Republic Day violence in the national capital, has intensified. The proof of the intensification lay in the Mahapanchayat that Tikait addressed on Wednesday in Jind, the hotbed of Jat politics. The fact that 50 khap panchayats backed the mahapanchayat addressed by Tikait left no one in doubt that the farmer leader has emerged as a big rallying point for farmers from Punjab, Haryana, Uttar Pradesh and elsewhere.

Besides him, leaders like Gurnam Singh Charuni and Balbir Singh Rajewal were present at the mahapanchayat organized by the Sarv Jatiya Kandela khap at Kandela village near Jind. The trigger for the sudden outpouring of support for the former Delhi Police constable was the viral video showing him in tears as he committed himself to the protest: he’d rather die than go back emptyhanded.

From that day on, he has single-handedly turned the course of the agitation with his combativeness. Political leaders are meeting him at the Ghazipur border – the epicenter of the agitation — saying it is their personal trip and not as a leader of a political party. Some of the leaders are: Shiromani Akali Dal chief and MP Sukhbir Singh Badal, Congress leaders and Rajya Sabha MP Partap Singh Bajwa from Punjab, Deepender Singh Hooda from Haryana, Shiv Sena MP Sanjay Raut and Delhi Deputy Chief Minister Manish Sisodia.

Insiders say Sanyukta Kisan Morcha (SKM), led by Punjab farmer leaders, continues to be in command of the agitation and that it was only a tactical move to make Tikait the face of the agitation. Reason: The agitation was being discredited by claiming that some of the supporters were tied to extremist Khalistani forces. “A day before the tractor parade on Republic Day, Tikait came to the Singhu border. A meeting was held to review the arrangements.

We were concerned over his likely arrest, so we sent his vehicle without him to Ghazipur and sent him in another vehicle. Violence took place the next day and out of frustration, we thought everything was finished; the agitation was over. But his emotional outburst infused a fresh life into the movement,’’ says Bhartiya Kisan Union (Lakhowal Group) general secretary Harinder Singh Lakhowal. The union has honoured Tikait at Ghazipur.

“The result of the revival of the agitation is that farmers are arriving at Singhu and Tikri border and are going to Gazipur border too, which was earlier not the case,” says Lakhowal. Panchayats across Punjab have directed that one person per family would visit the agitation site for a week, otherwise a fine of `1,500 would be imposed,’’ says Lakhowal.

Who is Rakesh Tikait? Rakesh Tikait was born on June 4, 1969 in Sisauli village of Muzaffarnagar in UP to farmer leader Mahendra Singh Tikait, founder of the Bhartiya Kisan Union. He did his post-graduation from Meerut University and pursued law. He was a constable in Delhi Police and served from 1985 to 1993. He joined the BKU in 1993 and his elder brother Naresh Tikait became the chief of the influential Baliyan Khap. Rakesh is the national spokesperson for BKU. He had unsuccessfully contested the Lok Sabha polls in 2014 from Amroha in Uttar Pradesh on a Rashtriya Lok Dal ticket. He had lost his security deposit.