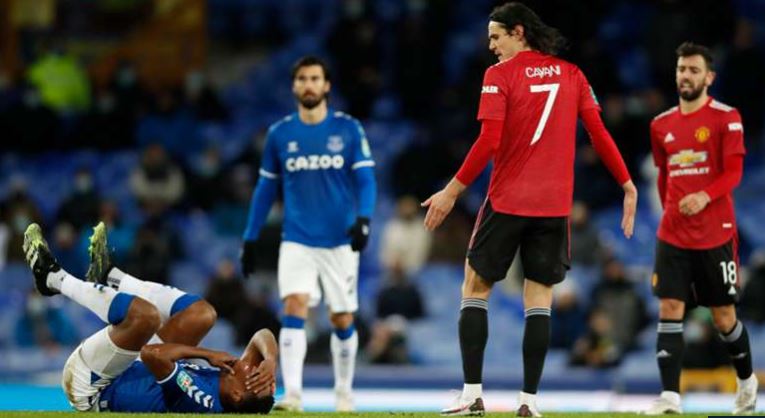 Ole Gunnar Solskjaer felt there was never a danger of Edinson Cavani being sent off for a clash with Yerry Mina during Manchester United’s 2-0 Carabao Cup win over Everton.

Cavani set United on their way to the semi-finals with an excellent late finish, but he could arguably have already been in the dressing room after a coming-together with Mina.Uruguayan forward Cavani appeared to grab Mina by the throat before the Colombian defender tumbled to the floor.

There was no VAR available on the evening, and it was not immediately clear whether referee Andy Madley had seen the incident. He spoke to both players but did not mete out any punishment; Solskjaer felt the official made the right decision in not producing a card.

“Two South Americans that have had a few battles before, they met in Copa America qualifiers so no, this was a proper game of football with fans, tackles, yellow cards and chances at both ends. I enjoyed it,” Solskjaer told Sky Sports.

Solskjaer also enjoyed Cavani’s excellent finish on 88 minutes, although he felt the forward should have been on the scoresheet earlier. “Not bad,” Solskjaer said of the goal. “But maybe the three he should have scored in the first half.