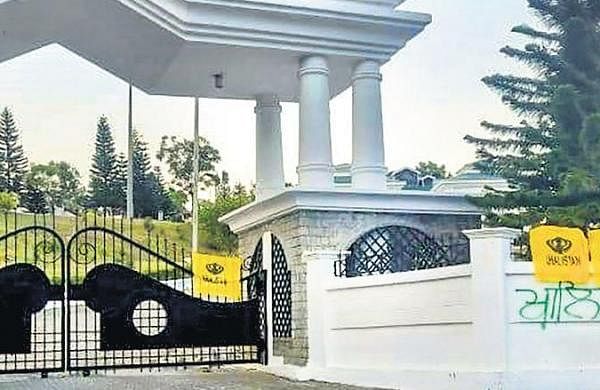 SHIMLA: Himachal Pradesh Police on Wednesday arrested a man from Punjab for putting up Khalistan flags on the main gate of the winter state assembly in Dharamshala and scrawling slogans on its walls, the state chief minister said.

The man had allegedly tied the flags of the secessionist group on Sunday — an act which was condemned across party lines. Search for a second accused is on and he will be caught soon, CM Jai Ram Thakur said.

In a statement issued here Wednesday, Thakur informed media about the police breakthrough which arrested one Harvir Singh from Punjab in the morning.

Singh has confessed to have put up the Khalistani flag and vandalising the outer wall of the HP Vidhan Sabha complex at Dharamshala with separatist slogans, he said.

Thakur said that the police while arresting Singh followed all procedures and the rule of law complete with an arrest warrant secured from a competent court.

The Himachal Pradesh Police had booked ‘Sikhs for Justice’ leader Gurpatwant Singh Pannun and had sealed the state’s borders in response. SFJ is an extremist group based abroad that has been demanding a separate Khalistan.