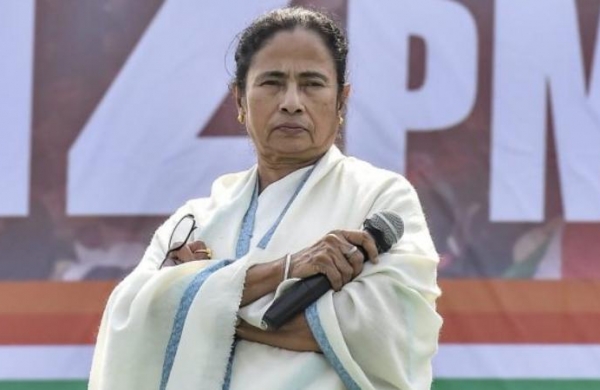 By Express News Service
KOLKATA:  The tense relations between the BJP-led Centre and West Bengal Chief Minister Mamata Banerjee reached another flashpoint on Thursday with the latter saying all visitors must produce a Covid-negative test report and stay in 14-day quarantine at their own cost. In other words, she sought to shoo off visiting Central teams.

Responding to allegations that a Union minister’s vehicle was attacked in West Midnapore district, Mamata charged that he had come to stir up communal discord.  Alleging that Union minister V. Muraleedharan’s visit was aimed at instigating BJP supporters, Mamata said: “Their continuous visits in the past six months have resulted in a record spike in infections. Now that all political meetings and rallies have been banned in the state, why are they still coming here? They want to instigate their supporters.”

Stating that controlling the second wave was the priority, she said: “All visitors, including Union ministers, have to produce negative RT-PCR test report to enter the state. Rule is same for all. Even for me. If anyone comes in a special flight, they too will have to either produce a negative report or get the test done. If the report is negative, they will have to undergo 14-day quarantine at their own cost,’’ she said.

Earlier, a Home ministry team landed in Kolkata in the wake of the post-poll violence. Muraleedharan’s convoy was attacked and his vehicle was vandalised by alleged Trinamool Congress supporters at Pachkudi in West Midnapore district. In addition, a TMC candidate who stood for election in Dinhata was beaten up by alleged BJP supporters.

Though the minister escaped unhurt, the driver of his car was injured. Chief Minister Mamata Banerjee said the Union minister’s visit was unnecessary and BJP leaders are trying to create communal discord by instigating their supporters. The incident took place when Muraleedharan went to the area to meet the families  of those who were allegedly attacked by Trinamool Congress supporters during the recent post-poll violence.

“He, accompanied by BJP leader Rahul Sinha, got off his vehicle and started talking to villagers who were attacked by the alleged ruling party’s supporters. Suddenly, a group of villagers, armed with bamboo sticks and bricks, attacked the convoy parked on the road and vandalised the minister’s vehicle,’’ said a police officer in West Midnapore.

In Dinhata, Cooch Behar, TMC candidate Udayan Guha, who lost by 57 votes to BJP’s candidate and sitting MP Nisith Pramanik, was attacked by alleged supporters of the saffron camp. Guha sustained fracture injury on his left arm. ‘’The attack on Guha took place when he was returning home from the party office. His security personnel were also injured,’’ said a police officer.

Pay farmers their arrears: CM to ModiKolkata: Adding pressure on the BJP-led central government for the second consecutive day on Thursday, West Bengal chief minister Mamata Banerjee shot a letter to PM Narendra Modi reminding him of his assurance made during election campaigns on releasing arrears of `18,000 to farmers under the PM-KISAN scheme. She also said in the letter that no fund has been received by either the state government or the farmers.