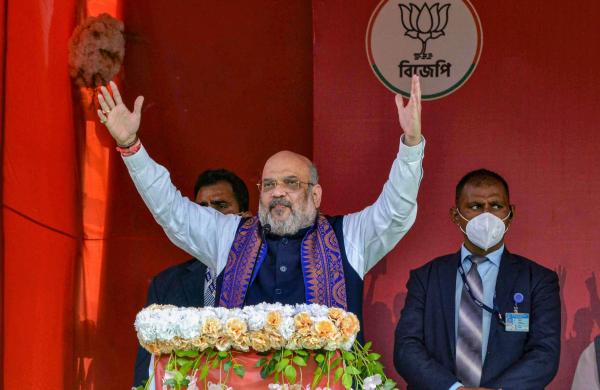 By Online Desk
The BJP will uproot TMC government from the state and give a ‘Sonar Bangla’ in 5 years, said Union Home Minister Amit Shah in Coochbehar on Thursday.

Addressing a public rally, he said, the upcoming assembly poll will be a contest between the “vikas (development) model” of the Narendra Modi government and Mamata Banerjee’s “vinash (destruction) model”.

The Home Minister said while the Modi government works for “jan kalyan” (public welfare), the Mamata Banerjee dispensation is bothered only about “bhatija kalyan” (nephew’s welfare).

He alleged that Mamata Banerjee gets angry at ‘Jai Shri Ram’ slogan, but will herself begin chanting it by the time assembly polls are over.

“Such an environment has been created in Bengal that raising Jai Shri Ram slogans has become a crime. Mamata Didi, if slogans of Jai Shri Ram are not raised here, will it be raised in Pakistan?” he asked.

He said the BJP’s ‘Parivartan Yatra’ is not for changing a chief minister, MLA or minister but ending inflitration and transforming the condition of West Bengal.