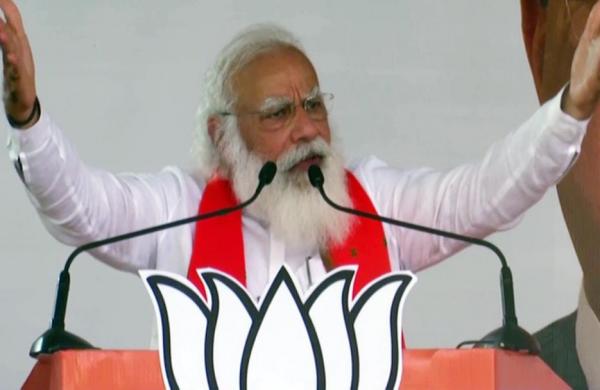 By Express News Service
KOLKATA:  Unleashing a blistering attack on the West Bengal chief minister on Sunday, Prime Minister Narandra Modi said Mamata Banerjee is repeatedly questioning the credibility of EVMs due to her fear of defeat. “You are questioning about EVMs’ functioning. These EVMs gifted you 10 years in power. Now you are questioning because you are anticipating your defeat,” the PM said at a rally in Bankura on the second day of his visit to the state.

Claiming that wall posters put up by the TMC showed Banerjee kicking at his head, Modi said if the Bengal CM wants, she can put her foot on his head and kick him but not the state’s development and the dreams of people living here. “I saw Didi’s men drawing pictures on walls where Didi is playing football with my head,” he said, questioning why the TMC supremo was insulting the heritage and culture of Bengal.

The state has a long tradition of using wall etchings of cartoons and grafitti for political messaging.Modi’s attack is believed to be in backdrop of Mamata’s slogan Khela Hobe (there will be a game) which she is raising in poll campaigns. Modi’s speech on Sunday centred around the CM as he hit out at her on several issues. “Didi, you have made only false announcements in the last 10 years. Had people known about your governance, they would not have elected you 10 years ago. You keep saying Khela Hobe when people have decided to Khela Shesh Hobe (the game will be over),” said Modi.

Reiterating the issues of cut-money and corruption, Modi said after wresting power, the BJP-led government will drag all those who are involved in the malpractice to the court of law. The saffron camp has engaged its heavy artillery in south Bengal as Union Home Minister Amit Shah also addressed a rally in East Midnapore district and came down heavily on the Bengal CM. Hitting out at her on aunt-nephew issue, Shah said, “Corruption and cut-money have shattered the dreams of poor people in the state. The cut-money that your nephew earns reaches you too. The electorate of the state will give a befitting reply to you in the upcoming Assembly elections,” said Shah.