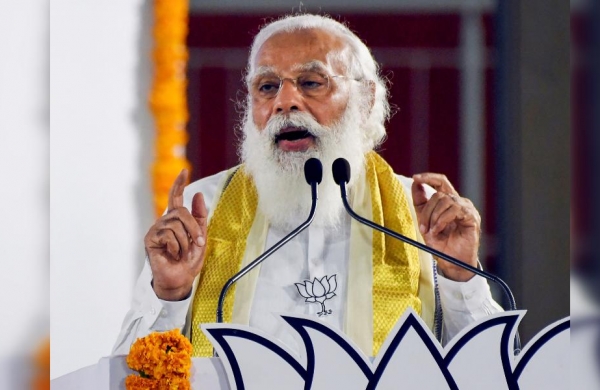 By ANI
DAKSHIN DINAJPUR: Attacking West Bengal Chief Minister Mamata Banerjee, Prime Minister Narendra Modi on Saturday said she has put the future of millions of youth at stake to secure the future of her ‘Bhaipo’ (nephew).

Addressing a public meeting at Gangarampur, Prime Minister said, “In the last 10 years, Didi’s government has made old industries shut and forced youths to migrate. Where there is appeasement, there is poverty, there is discrimination and suppression of hope and aspiration. Didi put the future of millions of Bengal’s youth at stake to secure the future of Bhaipo (nephew).”

“Didi o Didi… Such days would not have to be seen if you had twisted the ears of the tolabaazs (extortionists) who looted the poor people of Bengal and made your favourite bhaipo to do sit-ups,” he said.

“Appeasement does not lead to better roads, schools-colleges, industry, employment and more. The dilapidated roads in this region, the lack of hospitals and the lack of irrigational facilities is proof enough,” he said.

He further said, “Mamata Didi hates the names of Maa Ganga and Lord Shri Ram. Her hatred has increased so much that she changed the name ‘Ramdhenu’ to ‘Rongdhenu’. Didi abuses Indians who live on the banks of the Ganges. She insults their faith, food, language and attire.”

Prime Minister greeted the people of West Bengal for good voter turnouts in the last four phases of the state Assembly elections.

“The way the people of Bengal have voted at all stages, I greet the citizens of Bengal by bowing my head. After many decades, they have got the opportunity to vote fearlessly, otherwise, every vote was held amidst hooliganism,” he said.

‘Her politics has crossed a dangerous limit of vengeance’

In a separate rally in Asansol, PM Modi also slammed the Chief Minister after an FIR was registered against Banerjee for allegedly provoking an attack on central forces during the fourth phase of polling, which led to the deaths of four people, Prime Minister Narendra Modi on Saturday slammed her for crossing the limit of vengeance.

He said, “Her politics isn’t limited to just protests, but it has crossed a dangerous limit of vengeance.”

“She hatched up a criminal conspiracy and delivered her speech for provoking the general public, especially the women to launch an attack on the paramilitary forces armed with hand made various weapons and in the consequence of such conspiracy the villagers, especially the Muslim community including women in large numbers launched an attack on the paramilitary forces with hand made various weapons on 10.04.2021at 11 pm at Booth No. 5/126,” he stated in his complaint to inspector in-charge, Mathabhanga police station.

He further stated that the last four phases of voting have left the Trinamool Congress (TMC) in shatters.

PM Modi said, “Four rounds of voting, TMC is split into pieces. The remaining four rounds of polling, didi-bhaipo will be eliminated. In the fifth phase of voting, polling is underway where the button with the lotus symbol will be pressed in large numbers to form the BJP government.”

Voting for the fifth phase of West Bengal Assembly polls began at 7 am on Saturday amid tight security.

Polling is underway in a total of 45 constituencies covering the districts of Jalpaiguri, Kalimpong, Darjeeling and a segment of Nadia, North 24 Parganas and Purba Bardhaman in the fifth phase. A total of 319 candidates, including 39 women are in the fray in Phase-V.

There are 15,789 polling stations designated for this phase. The security for this phase has been beefed up with the deployment of 1,071 companies of central forces for ensuring a peaceful election.