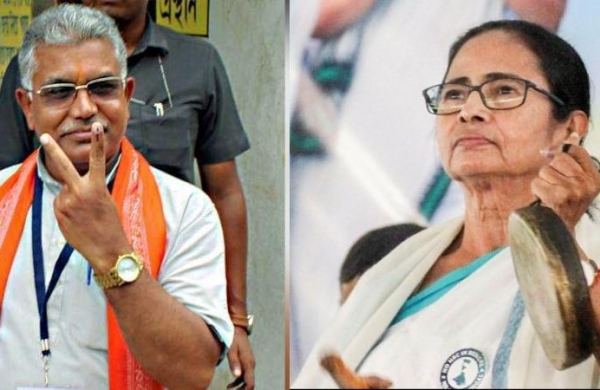 By PTI
KOLKATA: Alleging that West Bengal Chief Minister Mamata Banerjee was carrying out a “false propaganda” to belittle the Centre’s measures to curb the spread of COVID-19, state BJP chief Dilip Ghosh urged people to steer clear of all “misleading information” provided by her.

Trashing Banerjee’s charges that Modi had exported a major chunk of vaccines, Ghosh said, “Our country was working on seven vaccines, of which two has been approved, produced in bulk and administered to at least 12.5 crore so far.”

“Statesmen from several countries have compared Modijis feat with that of Lord Hanuman who carried mountain on his shoulder (to cure Lord Laxman with medicinal plant). Modiji sent boxes of vaccine to other countries. We catered to our needs as well as those of our global friends.”

Accusing the TMC government of suppressing COVID-19 figures last year, Ghosh said the state had plunged into a major crisis but the CM skipped several meetings convened by the PM to help tackle the matter, and her government did not respond to missives of the Union health ministry.

“The TMC government had created confusion in people’s minds by frequently changing lockdown dates. The CM, herself, flouted lockdown guidelines by hitting the road, and encouraging assemblies at places.”

Slamming Banerjee for christening trains meant for returnee migrants as ‘Corona Express’, the Midnapore MP, during a press meet, said “around 30-40 lakh migrants wanted to return to Bengal but our chief minister was reluctant to give them entry.”

Claiming that Banerjee has entered into an understanding with the Congress, Ghosh further said, “I don’t know why Rahul Gandhi cancelled his rallies and Adhir Chowdhury is not campaigning anymore.”

Referring to the TMC supremo’s allegations that the saffron party was “conspiring to create communal disturbances” on Ram Navami, BJP state spokesperson Shamik Bhattacharya, who was also present at the meeting, said, “This is the first time a chief minister levelled such charges against a party.

“She made this remark during a meeting in a minority belt. It only goes on to show that she might be the one trying to foment trouble,” Bhattacharya said.

BJP IT cell head Amit Malviya, who is in the city, said Prime Minister Narendra Modi will be addressing four public meetings on April 23 in Bengal, and a limited number of audience would be allowed at the venue.

Modi is set to address rallies at Malda, Baharampur, Seuri and South Kolkata on Friday.

“We had followed the same protocol during Bihar assembly polls with strict adherence to all election commission guidelines,” Malviya added.