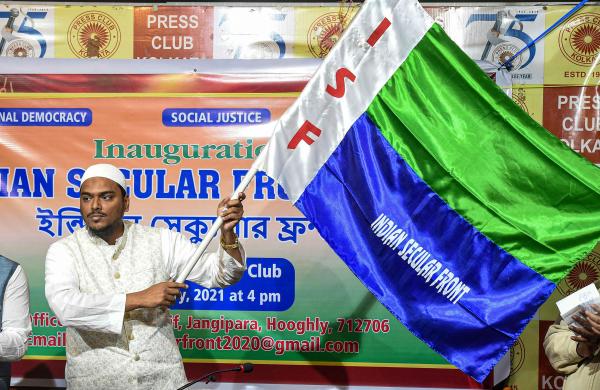 By PTI
KOLKATA: Pirzada Abbas Siddiqui, the head of Muslim shrine Furfura Sharif, who has muddied the political waters of West Bengal with the launch of Indian Secular Front (ISF), feels the Mamata Banerjee government has done more harm than good to the Muslims by creating a Hindu-Muslim divide.

The 34-year-old cleric is trying to forge an alliance with the Congress-CPI(M) combine as also the AIMIM of Hyderabad MP Asaduddin Owaisi ahead of the assembly polls, after the TMC gave him the cold shoulder.

Siqqiqui asserts his newly floated political outfit will prove to be the ‘Kingmaker’ in the state which roughly has 30 per cent Muslim voters.

He also rejects as baseless the accusation that he has decided to jump into the electoral arena to cut into the TMC’s Muslim vote base, assiduously nurtured by Banerjee over the last ten years, and has no hesitation calling the ruling party “Communal and vindictive”.

“In the last 10 years, the TMC government has only fooled the Muslims and Dalits. Chief Minister Mamata Banerjee has done nothing for them. She has only created a perception that this government is doing a lot for the Muslim community only to serve her political interests,” he said in an interview with PTI.

Siddiqui said the perception of “Muslim appeasement” has led to a rift between the Hindus and Muslims.

“The BJP worked overtime to exploit it and rub it in that Muslims are getting everything and the cost of Hindus. Mamata Banerjee has done more harm than good to Muslims by creating this perception,” he said.

Talking about the alliances his outfit wants to forge ahead of the assembly elections likely in April-May, Siddiqui said the prospects of a tie-up with the TMC are quite “slim”.

“We had proposed a Grand Alliance of all parties, including the TMC, to fight the BJP.

But our proposal did not elicit any response from the TMC.

So now the chances are very slim,” he said.

Siddiqui alleged that after his announcement about contesting the elections, the state government has started harassing ISF supporters by implicating them in false cases.

“They (the TMC) will get a befitting reply for their arrogance,” he asserted.

He, however, feels the chances for forging alliances with the Congress-Left combine and the AIMIM are bright.

Siddiqui said the doors of his organisation are open to all barring the TMC and the BJP.

“We are also in talks with AIMIM. Owaisi Sahab told me they will follow us as we know Bengal better,” Siddiqui, who is fondly called Bhaijaan (elder brother) by his followers, said.

After AIMIM’s impressive showing in the recent assembly polls in Bihar, where its candidates won five seats of the Seemanchal region, Owaisi has declared his party will also contest the West Bengal assembly polls.

He has visited West Bengal quite a few times and also held parleys with Siqqiqui.

After meeting Siddiqui earlier this month, Owaisi had said the AIMIM and ISF will work together in the state.

“We will work behind him and support whatever decision he takes,” Owaisi had said.

Abbas Siddiqui rejected suggestions that his outfit will be a B-Team of the BJP, an accusation also levelled by Mamata Banerjee against Owaisi’s party.

“We are not here only to seek Muslim votes but also backward community votes.

Had the TMC worked for the minorities, there wouldn’t have been a need for us to enter the fray.

Everybody has the right to fight elections in a democracy,” Siddiqui said.

Owaisi was accused of having acted like a B-Team of the BJP after the NDA managed a wafer-thin victory over the RJD-led Grand Alliance in Bihar.

Muslims and backwards form the bedrock of the RJD’s support base, and a split in the minority votes was seen as a reason for the opposition alliance’s defeat.

“It’s because I am a Muslim you are raising this question of splitting votes.

You won’t have asked this question had a Hindu come up with a new political outfit,” he said.

Though Siddiqui remained non-committal about the number of seats his outfit will contest, he asserted,”Whatever the number, we will emerge as the kingmaker after the polls.

” He also accused Banerjee of paving the way for the rise of the BJP in the state and now playing the “victim card”.

“Mamata Banerjee aligned with the BJP in 1998. She was in alliance with the BJP till 2006 and was also a union minister. She was the first leader to rake up the issue of illegal infiltration from Bangladesh in 2005. The BJP is doing it now. This shows the true colours of people questioning our credibility,” he said.

When asked to comment on the incident when ‘Jai Shri Ram’ slogan was raised at the Victoria Memorial during the birth anniversary celebrations of Netaji Subhas Chandra Bose, Siddiqui said Mamata Banerjee should have ignored it.

“By reacting the way she did, Mamata Banerjee only advertised the slogan.

It all seemed staged by her,” he said.

He also accused the TMC of trying to “fool” the minority community with its vociferous opposition to the CAA and NRC.

“They (the TMC) just want to project themselves as the saviour of Muslims,” he said.

Comprising around 30 per cent of the state’s population, Muslims are widely believed to influence the election outcome in 100-110 of the state’s 294 assembly seats, and have acted as a bulwark for Banerjee’s party against any attempt to upset her applecart.

However, there are apprehensions that a split in Muslim votes due to the presence of parties led by leaders from the community could dent her bid for a third straight term in office.