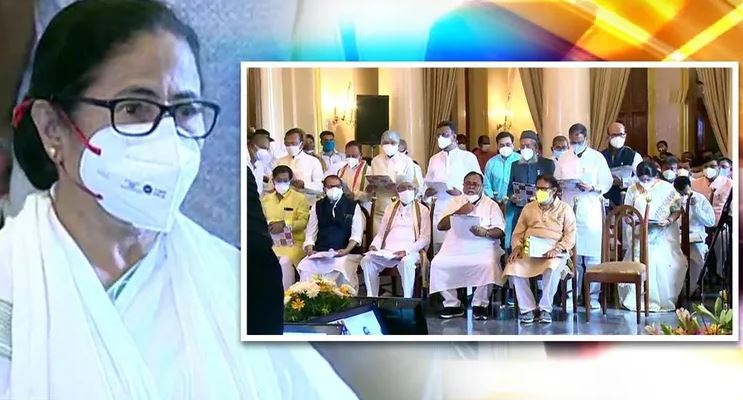 In a big development on Monday, 43 TMC leaders were sworn in as Ministers in the Mamata Banerjee-led West Bengal government. 24 Cabinet Ministers, 10 Ministers of State (Independent charge), and 9 Ministers of State were administered the oath of office and secrecy by Governor Jagdeep Dhankhar at the Raj Bhavan in Kolkata. While Banerjee has retained many of her previous colleagues, the fresh faces in the Cabinet include Bankim Chandra Hazra, Rathin Ghosh, Pulak Roy and Biplab Mitra.

Most importantly, Amit Mitra serving as the Finance Minister of the state since 2011 has been included in the Cabinet. As he did not contest the West Bengal polls, the ex-FICCI secretary-general will have 6 months to get elected to the state Assembly. Former IPS officer Humayun Kabir and Ratna De Nag are among the list of Ministers who will hold Independent Charge of a Department. Meanwhile, cricketer-turned-politician Manoj Tiwary too found a place in the Council of Ministers.After a tough election campaign, the TMC decisively won the West Bengal election to win 213 seats, while the BJP was able to win only 77 constituencies. The voter turnout was 84.63 percent, 86.11 percent, 84.61 percent, 79.90 percent, 82.49 percent for the seats going to the first, second, third, fourth, fifth, sixth, seventh and eighth phase of polling. , 79.11 percent, 76.90 percent and 78.32 percent respectively. While the JP Nadda-led party won 74 more seats than in the previous election, a vote share of 38.13% did not challenge TMC, which garnered a 47.94% vote share. READ | WB CM Mamta’s Trinamool encircles Kangana Ranaut; TMC Spokes filed FIR on Bollywood Star While the ruling party improved its performance compared to 2016, it suffered a small setback as WB CM Mamata Banerjee lost to her BJP rival Suvendu Adhikari from Nandigram. However, barring Nandigram MLA, all other TMC leaders who had switched to BJP before the election could not win their seats. Even former Rajya Sabha MP Swapan Dasgupta, Union Minister Babul Supriyo and BJP Lok Sabha MP Lockett Chatterjee also suffered defeat.