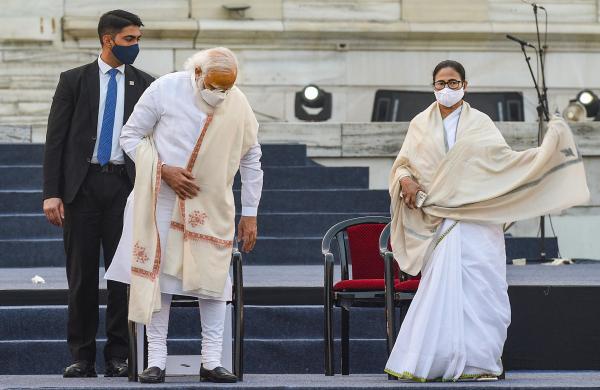 By Express News Service
KOLKATA:  Chief Minister Mamata Banerjee is unlikely to share the stage with Prime Minister Narendra Modi on Sunday in Haldia, where the latter would dedicate four projects worth `4,700 crore in oil, gas and infrastructure sectors. The projects are those of PSUs Indian Oil Corporation Limited (IOCL), Bharat Petroleum Corporation (BPCL), Gas Authority of India (GA IL) and the NHAI.

Despite being invited, Mamata is likely to skip the event in the backdrop of the apolitical January 23 event organised by the Union Information Ministry at Victoria Memorial where a section of the audience raised Jai Shri Ram slogans when Mamata was about to speak, said a source in the Trinamool. Irked by the sloganeering, Mamata had skipped her speech in protest. “It appears that the CM has been invited for a re-run of the Victoria Memorial episode,” said a TMC leader.

Elected TMC leaders too will not attend event Earlier, BJP’s Saumitra Khan tweeted TMC MP from Ghatal, Dipak Adhikary alias Dev, would share the stage with Modi. “When Mamata found it out, she called Dev asking him if he was planning to go even if she might not. He said he was certainly not going,” said a TMC leader