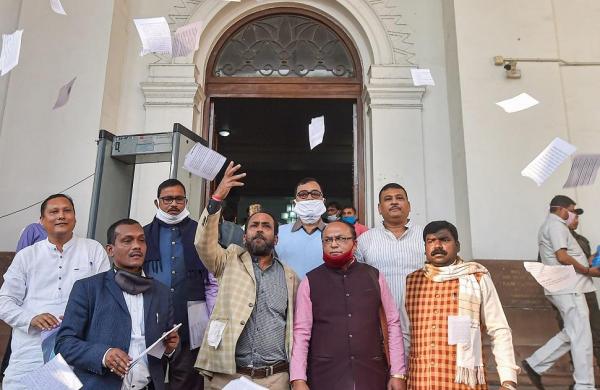 By PTI
KOLKATA: With state elections round the corner, West Bengal Chief Minister Mamata Banerjee on Friday presented a vote-on-account for Rs 2.99 lakh crore in the Assembly, and made a slew of announcements, including a hike in the annual aid of farmers.

The estimates for the first few months of the new fiscal, starting April, would be taken up for discussion over the next two days, before it is passed by the House.

Banerjee, during the assembly session, said her government has worked tirelessly for the state’s overall development, despite not getting necessary help from the central government.

“We have decided to build 20 lakh houses for the SC and ST communities and upgrade mud houses into pucca ones.

We are allocating Rs 1,500 crore for the project. We have also decided to provide aid to government-recognized unaided madrasas, and Rs 50 crore has been allotted for the same.”

The chief minister also said that the budget, under the government’s ‘Krishak Bandhu’ scheme, has been increased to Rs 6,000 crore from Rs 5,000 crore, keeping in mind the interest of farmers.

“We will build 100 new schools in tea garden areas. Additionally, 100 new English-medium schools would also come up in areas dominated by SC and ST communities.

For this, we plan to recruit at least 300 para teachers,” she said.

The feisty TMC boss further stated that her government has agreed to implement the centrally funded PM Kisan Samman Nidhi scheme in Bengal.

Stressing the need to develop infrastructure, Banerjee said rural roads, spanning 46,000 km, would be built in the state in the next five years.

“By next year, we plan to build 10,000 km of rural roads, all of which will be connected with state highways….We will also build four new flyovers in the city, including one stretching from E M Bypass to Newtown and the other from Paikpara to Sealdah station,” she said.

She said her government plans to generate 1.5 crore new jobs in Bengal, and vacancies in government offices would be filled as part of the initiative.

“We also propose to waive road tax from January 1 to June 30 this year,” Banerjee said.

The CM, during the presentation, said the state government plans to build a state-level planning commission as a mark of tribute to Netaji Subhas Chandra Bose.

“We will build Jai Hind Bhawan in every district and Azad Hind Smaark at Newtown,” she said.

She maintained that ‘Duare Sarkar’ camps, where people get to enrol their names to avail benefits of state-run schemes, would be set up twice every year.

Finance Minister Amit Mitra, who is currently unwell, skipped Friday’s assembly session, which was marked by unruly scenes during the day.

BJP legislators trooped into the Well of the Assembly, demanding that Mitra, and not Banerjee, should be reading out the vote-on-account. Later, they walked out of the House. Left Front and the Congress MLAs also boycotted the session.