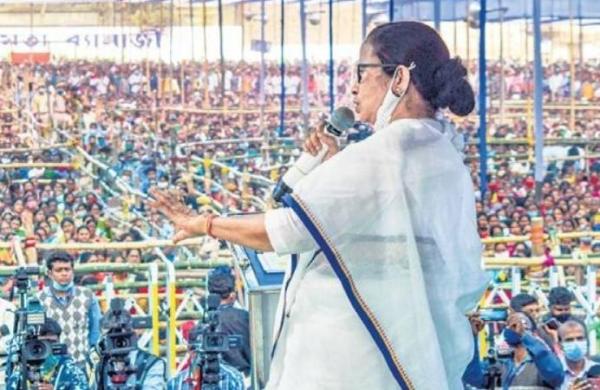 By Express News Service
KOLKATA: Ratcheting up her rhetoric against the Citizenship Amendment Act (CAA), Mamata Banerjee on Monday fired a fresh volley at the BJP in an attempt to draw the Matua population away from the saffron camp. Matuas are Hindu immigrants from Bangladesh counting on the implementation of CAA to gain Indian citizenship, a desire the BJP capitalised on during the last Lok Sabha election.

“Why do you (Matua) need citizenship? You are already citizens,” said Mamata, addressing the electorate at Ranaghat in Nadia on Monday. Mamata’s Monday rally was an attempt to regain the ground it lost to BJP in Nadia in the last hustings. “I will never allow the BJP to implement CAA or NRC. It (BJP) is trying to hoodwink people,” she said at what was her citadel before the saffron wave swept across the region, which accounts for over 40 per cent of the Matua electorate that supported the BJP in 2019.

Tapping into the simmering discontent among the Matuas over the delay in the implementation of CAA, Mamata reiterated her position that the Act would entail the Centre demanding documents related to date of birth of elderly parents. “Most of them do not have such documents. If your parents fail to submit the documents, they will be driven out of the country. So, in the upcoming elections, drive the BJP out of Bengal to protect your family,” she said.

Mamata has been into an overdrive to draw the Matuas away from the BJP by playing up their citizenship fears. Last month, she addressed a rally in Bongaon in North 24 Parganas and on Monday, she was in Ranaghat. Electorate at both the seats is predominantly Matua and Dalit immigrants from Bangladesh. Mamta’s attempt is aided by the studied silence maintained by the BJP leadership. Recently, BJP MP from Bongaon Shantanu Thakur had expressed his discontent over the delay and hinted at possible shift in Matuas’ political allegiance.