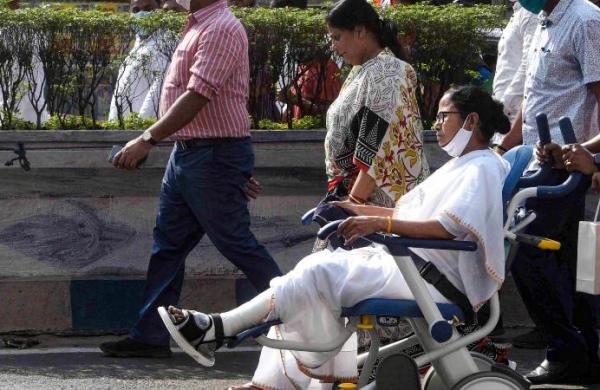 Express News Service
KOLKATA: In her first public appearance after receiving injuries in Nandigram, the West Bengal chief minister kicked off a roadshow on the wheelchair in Kolkata on Sunday and said she would campaign across the state with her injured casting-covered foot on the carriage cart.

“I am hurt and unwell, but my goal remains the same. My body is full of bruises. I will continue to roam around Bengal on this wheelchair. If I go on bed rest, who will reach out to the people of Bengal ?” asked Mamata, while addressing a rally at Hazra crossing in south Kolkata at the end of the roadshow.

On March 10, Mamata received injuries when she was greeting her supporters standing on the footboard of her vehicle and got sandwiched between the front door and the seat because of a pressure from the crowd in Nandigram from where she is contesting in the upcoming Assembly elections. She was under treatment at SSKM Hospital and released on Friday last week.

The roadshow was planned after Mamata came out of the hospital. She was accompanied by the candidates fielded in Kolkata along with hundreds of party supporters.

“Remember, an injured tiger is extremely dangerous. I will never bow down. May the unholy powers be destroyed and the good prevails,” she said.

In Nandigram, the Assembly constituency which has become the epicenter of Bengal’s fierce electoral battle, Mamata is contesting against her once-trusted lieutenant and colleague in her cabinet Suvedu Adhikari, who defected to the BJP.

Mamata, after the roadshow, flew to Durgapur to address a series of rallies in Junglemahal, where the BJP made deep inroads by bagging all five Lok Sabha seats in 2019 general elections, starting from tomorrow.

Mamata’s roadshow on Sunday and her announcement to travel across Bengal on the wheelchair have triggered concern in the saffron camp as the Bengal CM’s arch-rival party is fearing the TMC supremo might draw sympathy votes in her favor.

BJP’s Bengal chapter, on Sunday, wrote a letter to the chief electoral officer requesting him for furnishing the medical treatment history of Mamata for the public to know the truth.

“The Trinamool Congress and its cadres have attempted to use the Hon’ble Chief Minister’s purported injury, which seems self-inflicted in order to gain sympathy and cause violence in different parts of the state…. It has been noted that a multi-specialty medical board was promptly consulted by SSKM hospital to treat the Hon’ble Chief Minister, but the health bulletins issued by them thereafter had been opaque non-specific….We sincerely urge you to seek details from the treating hospital regarding diagnostic and treatment history of her injury,’’ the letter said.