Mamata asks ‘Marxist friends’ not to vote for CPI-M, Congress 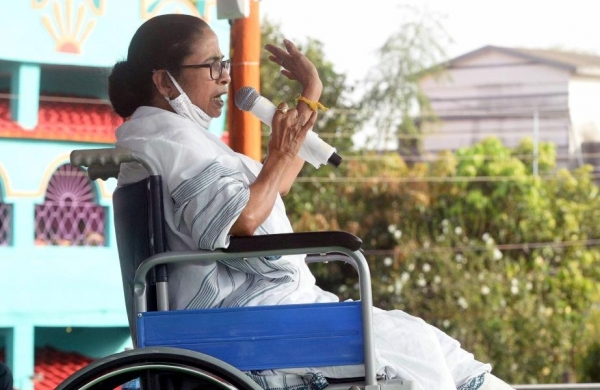 By PTI
GARBETA/KESIARI: West Bengal Chief Minister Mamata Banerjee campaigning in tribal Paschim Medinipur district on Thursday for the coming state election asked “Marxist friends” not to vote for either the CPI-M or Congress, who are “cohorts of the communal BJP”.

She asked people not to give a single vote to those “who have links with the killers of Gandhiji.”

CPI-M, she said, is a “rotten” party whose leader was accused in the unearthing of skeletons in Paschim Medinipur.

“Now the CPI-M is helping the BJP,” she alleged.

“I request my Marxist friends not to vote for either the Congress or the CPI-M as they have become cohorts of the communal BJP,” the TMC supremo said.

The CPI-M, Congress and the fledgling ISF have formed an alliance in West Bengal.

Banerjee was referring to the unearthing of skeletal remains at Narayangarh in Paschim Medinipur district in 2011 and a CPI-M leader was accused in connection with it.

Banerjee is facing a difficult fight this time as she will take on her one time follower and now BJP leader, Suvendu Adhikari at Nandigram in neighbouring Purba Medinipur district.

She had earlier turned to the Left Front and Congress to defeat the saffron party, which has emerged as the main opposition in the state.

“Only TMC will keep up its fight against the BJP,” she said and blamed the saffron party for conspiring against her at Nandigram which led to her being injured on March 10 when she was campaigning there.

“After the attack they (BJP) are now spreading falsehoods. After the conspiracy they are now involved in character assassination,” Banerjee said.

The Trinamool Congress supremo alleged that the BJP- led government at the Centre is involved in plundering crores of rupees and accusing rival parties of graft.

“Tell us what happened to the PM Care fund, the currency notes declared defunct during notebandi. What happened to the Ujjwala Yojana? “How much money is changing hands by selling PSUs and closing them down? There is no audit, no account of that huge amount,” she said.

Banerjee said BJP leaders from outside the state arrive in choppers and planes with “sackful of cash” before elections to lure voters and to “loot votes”.

“During election they give cash to clubs, temples, mosques,” she said and alleged that “CPI-M harmads (goons) have crossed over to BJP.”

She blamed the saffron party of bringing in “goondas” (musclemen) from outside in trains and buses to “loot votes”.

Calling BJP anti-farmer and anti-tribal, she said “We (TMC) will not take away land from tribals. We have given them land pattas. We will not allow BJP to implement the anti- farmer farm laws which will rob farmers of the right to choose the person to whom they will sell the produce of their land.”

Banerjee acknowledged that the relief given by the TMC government after Cyclone Amphan might have missed out “one or two” beneficiaries.

But BJP was not seen anywhere during the crisis and only TMC workers were by the side of the affected people.

“Thousands of crores of rupees reached the affected after Cyclone Amphan due to the state government’s inititative. But there can be one or two exceptions. Where was BJP when we rushed in to be with the affected people? Where were its leaders? At the time of human misery they were absent,” she said.

Asserting that TMC will never allow NPR exercise in West Bengal, the party supremo alleged that BJP will delete the name of voters if anyone is not present at home during the visit by enumerators.

“They (BJP) will just evict you (the people). But we will not allow them to carry on the exercise here. We did not and we will not. Not a single member of a family, a citizen of the country can be evicted from here,” she asserted.

National Population Register(NPR) is a document containing names of the country’s “usual residents”.

Calling BJP a party of rioters, she said “We don’t want riots or bloodshed. We don’t want the politics of retaliation to come to Bengal.”

Recounting that Garbeta was rocked by Maoist violence during the Left Front rule and 300 people were killed in a year, she said there has been a vast change in the situation during the past 10 years due to development under TMC.

Banerjee announced that Rs 10,000 will be given for every acre possessed by a farmer if TMC returns to power in the coming state election.

An outreach programme ‘Duare Ration’ (ration at the doorstep) will be implemented to ensure that not a single family is left out of the public distribution scheme.

The programme will be held every four months.

Besides, Rs 10 lakh will be provided to every student for higher studies under the Student Credit Card scheme with only four per cent interest.

Those studying in standard 12 will be given Rs 10000 each to buy a tab to help them in their studies if TMC wins the state election, she said.

People belonging to the scheduled castes and scheduled tribes will be given an allowance of Rs 1,000 per family every month.

BJP leaders have lampooned her for chanting the shlokas in public before the polls.