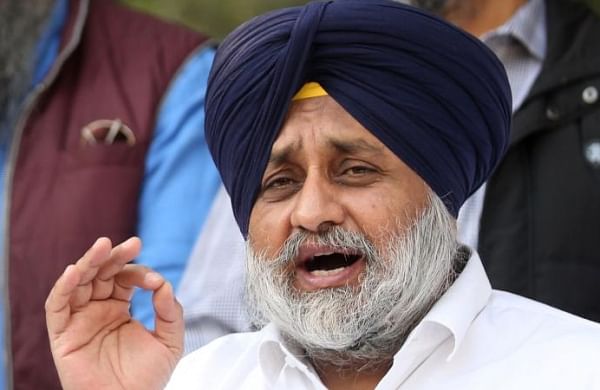 The Shiromani Akali Dal (SAD) leader also called Mann as a “dummy face”, alleging that Delhi Chief Minister Arvind Kejriwal would be the “real face” of the AAP in the state.

Badal was reacting to the announcement of AAP declaring Mann as the chief ministerial face for the February 20 Assembly polls.

Earlier in the day, AAP national convener Arvind Kejriwal had announced the results of the party’s “Janta Chunegi Apna CM” drive, in which it had asked the people of Punjab who should be its choice for the top post.

On the other hand, Punjab Minister and Congress leader Raj Kumar Verma dubbed the AAP’s exercise to pick up its CM face as farce, saying people of Punjab won’t be befooled with this as they have already made up their mind to bring back the Congress to power.

Badal, meanwhile, said the AAP has fallen back on “compromised” candidate Bhagwant Mann as no one was ready to lead the party in Punjab.

Terming the nomination of Mann as “a stage managed non-event”, the SAD president said Kejriwal never wanted to make him the face of the party in Punjab.

“He has been saying so at Mann’s face while asserting that the party was looking for a capable candidate. It is also a fact that AAP sounded off a number of prospective candidates but each and every one of them refused to lead the party. This is why the responsibility has been thrust on Bhagwant after a make believe survey,” said Badal in a statement here.

He said making Mann the face of the party reflected the “complete bankruptcy” of the AAP.

Badal said, “A desperate public relation exercise is underway to wash away Mann’s omissions and commissions and project him as a leader who can take on the mantle of chief minister even though his wayward and irresponsible conduct is well known to each and everyone.”

Badal said Kejriwal cannot take Punjabis to be so “naive” as to approve his “rubber stamped” candidate.

“They need strong and decisive leadership as well as a leader with a proven track record of conducting swift development as well as ensuring law and order and peace and communal harmony in this border state. Bhagwant Mann does not fit this bill,” said Badal.

Later, Badal said in a tweet, “AAP’s newly nominated CM face @BhagwantMann is a dummy. AAP is running its campaign on ‘ek mauka Kejriwal nu’. Will it now uproot boards put up across Pb, changing it to ‘ek mauka Bhagwant Mann nu’? Obviously not. @ArvindKejriwal continues to be the real face of AAP in Punjab.”

Meanwhile, BJP general secretary Tarun Chugh slammed AAP for choosing Mann and recalled how the AAP Punjab unit chief was castigated in the Lok Sabha for his “inebriated” behaviour and how some of the Lok Sabha members had complained against him.

“But AAP does not care for it all and by engineering so-called people’s vote through social media has paved the way for a tarnished leader to become the chief minister face,” Chugh said.

It has sent serious signals to Punjab as to how AAP would be governing if at all it comes to power, he said in the statement.