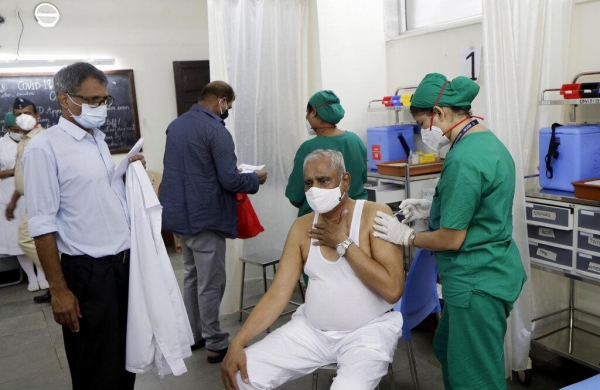 The deaths that had taken place before one week but were not accounted for till now were added to the overall tally which thus went up by 1,263, the health department said.

The recovery rate of Maharashtra now stands at 91.74 per cent while the case fatality rate is 1.57 per cent.

The positivity rate is 17.04 per cent, the release said.

The larger Mumbai division reported addition of 3,780 cases and 96 deaths.

As many as 7,487 COVID-19 cases were reported in Pune division, chiefly from Pune’s rural parts as well as Solapur and Satara.

As many as 1,202 cases were reported from Sangli’s rural parts along with 21 deaths.

Kolhapur rural added 1,005 cases and 23 deaths while the virus claimed 21 lives in Ratnagiri and 14 in Sindhudurg districts.

The division reported 50 deaths of which Aurangabad rural and Jalna district reported 20 and 10, respectively.

Latur division reported 3,107 cases and 57 deaths of which 22 deaths were reported from Osmanabad followed by 20 from Beed district.

On Friday it reported a decrease with 711 new cases coming to light, while Osmanabad district added 1,812 cases.

The Nagpur division added 2,317 cases while 47 people died of COVID-19 infection including 15 each in Nagpur city and Wardha district.

The Pune civic body has asked Cummins India Limited to shut its plant for four days after 50 employees were detected with COVID-19, an official from the firm said on Friday.

The firm said it was taking all precautions as well as following government regulations on the issue, but added that only four positive cases were found since last week, while the number of active cases was 11 currently in a workforce of over 2,000.

The firm said the infection positivity rate in its plant was much less than that in civic areas like Kothrud and Pune.

A notice issued by Pune Municipal Corporation assistant commissioner Sachin Tamkhade on May 19 said guidelines were not followed properly in the firm’s plant due to which some employees got infected.

An inspection had found that 50 employees were presently coronavirus positive, while the caseload over the past two months stood at 240, including three deaths, it added.

“It has been found there is only one dining place (canteen) where all employees come together for meals, and that could be the possible spot for the COVID-19 virus spread,” the notice stated.

The plant was declared a ‘corona spot’ and asked to remain shut between May 20 and 23, and submit a report by May 22 after subjecting staff to RT-PCR tests, PMC officials said.

The firm, in a statement, said, “Right now, since last week we have found only four positive cases. We have only 11 active COVID-19 cases as of date in an employee strength of 2000 plus. All these cases have been detected outside the workplace due to everyday screening at the entry and exit, social distancing at shop floors, common areas, etc. There is very little possibility of infection at the workplace.”

The firm also claimed its had conducted a vaccination drive for employees and contractors above 45 years of age.

PMC Assistant Commissioner Tamkhade said the plant inspection was carried out after three staff deaths were revealed and the firm was asked to submit a report.

“They gave us a report on May 12 which said, as on that day, active cases were 50, and it was on this basis that it was issued a notice. If the firm now says it has only 11 active cases, the the negative reports of the remaining 39 must be submitted to us,” Tamkhade said.

Maharashtra Deputy Chief Minister Ajit Pawar on Friday said over 300 cases of Mucormycosis, a fungal infection prevalent among people who have recovered from COVID-19, have been reported in Pune district and the supply of drugs needed for treatment is a cause for concern.

Speaking to reporters after reviewing the COVID-19 situation in Pune, Pawar, who is also the guardian minister of the district said the Centre has been apprised about the matter.

“There are over 300 cases of Mucormycosis or black fungus in Pune, including patients from other districts. However, there is a shortage of the anti-fungal drug Amphotericin B.As each patient requires six injections per day, we need 1,800 vials per day. Unfortunately, the supply isn’t in keeping with the demand,” the deputy chief minister said.

The state government had approached pharma companies, but it was in turn informed that the Centre has taken control of the drugs, he alleged.

“During the Prime Minister’s interaction with district collectors of the states, the state government sought the drug and also apprised him about the shortage. Hope the situation changes and the drug supply is as per the demand,” Pawar said.

Meanwhile, there has been a drop in the daily tally of COVID-19 cases in the district and the number of patients getting discharged is increasing, he said, adding that the rate of infection in the rural areas is still a cause for concern.

When asked about the supply of vaccines, Pawar said the state government is following up with the Centre for the vaccines.

“The Brihanmumbai Municipal Corporation (BMC) has issued a global tender.

During our consultation with Serum Institute of India (SII) and Bharat Biotech, they told us that they will ramp up the production in the near future,” he said.

Speaking about the state’s preparedness to tackle the third wave of the pandemic, Pawar said a decision has been taken to increase the production of oxygen by 3,000 metric tonnes in the state and an incentive will be offered to industries to set up oxygen plants in remote areas.

Meanwhile, Mumbai on Friday added 1,416 COVID-19 cases to its tally, taking it to 6,95,080, while in a sign that the second wave of infections was easing, the case doubling time crossed the 300 day mark and surged to 317, officials said.

As on the Thursday, the time taken for the caseload to double was 297, they added.

The country’s financial capital now has a toll of 14,522 after 54 deaths took place during the day, while the recovery rate climbed to 6,49,389, or 93 per cent of the caseload, as 1,766 people were discharged from hospitals.

BMC commissioner Iqbal Singh Chahal said the 1,416 cases detected on Friday were from 33,078 tests, some 4,000 more than the tests conducted on Thursday, which had revealed 1,425 cases.

The overall number of tests in the city stands at 60,19,422, civic officials said.

The city’s overall case growth rate was 0.23 per cent for the period between May 14 and 20, and it now has 69 containment cones and 273 sealed buildings.