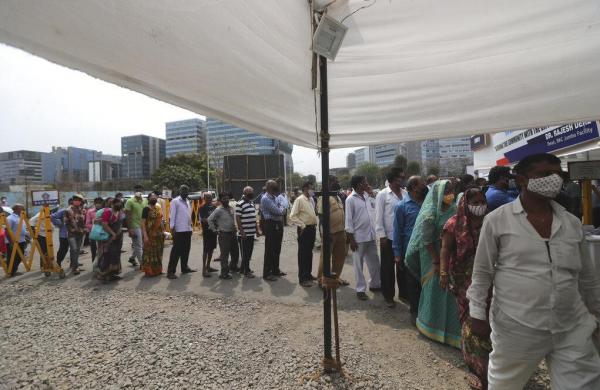 By PTI
MUMBAI: Maharashtra reported 56,286 new coronavirus cases on Thursday, which took its caseload to 32,29,547, while 376 deaths due to the infection pushed the toll to 57,028, the health department said.

On Wednesday, the state had recorded the highest daily count of 59,907 cases and 322 fatalities.

A total of 36,130 patients recuperated and got discharge from hospitals on Thursday, due to which the state’s recovery count reached 26,49,757, it said.

Maharashtra’s COVID-19 recovery rate now stands at 82.05 per cent, while the fatality rate is 1.77 per cent.

Mumbai saw a single-day spike of 8,938 cases and 25 deaths on Thursday.

In Mumbai division, which comprises Mumbai city and its satellite towns, 16,574 cases were reported and 79 people died.

The mayor has written to the civic administration and sought its immediate compliance, an official statement said.

The city has been witnessing a surge in COVID-19 cases, causing acute shortage of beds and accessories, the Mhaske said.

The civic administration should throw open the unoccupied and vacant civic properties for setting up COVID-19 treatment centres, he said.

The mayor also directed the civic administration to permit hospitals that have more than 25 beds to start treatment for COVID-19 patients.

He further stated that the temporary COVID-19 hospital set up at a parking plaza in Thane city should be made a permanent one.

The state on Thursday also decided to cap the price of Remdesivir between Rs 1,100 and Rs 1,400 per vial with Health Minister Rajesh Tope calling for slashing the MRP of the key COVID-19 drug.

He made it clear that theprice of a Remdesivir injection should not cross Rs 1,400.

Tope said with a rapid rise in COVID-19 cases, the state may need 1.5 lakh Remdesivir injections daily which would require ramping up of production.

The MRP of the anti-viral drug, widely used in treatment of serious coronavirus patients, runs into a few thousands.

Besides, he warned of a crackdown against stockists hoarding the medicine and asked doctors to be judicious in use of the injection.

He said Remdesivir manufacturers should supply the stock directly to government hospitals.

The stock sent to district collectors will be given to private hospitals as such a system will help to stop black- marketing and hoarding, Tope said.

Tope sought setting up of flying squads in every district to check malpractices in sale of the injection.

He saidat present 50,000 vials are being supplied and used on a daily basis in hospitals.

With the active cases shooting beyond the 5-lakh mark in Maharashtra, the demand for the medicine authorised for emergency use to treat COVID-19 has gone up.

“We may need 1.5 lakh injections daily and hence production needs to increase,” he said.

“These are pandemic times, let’s not engage in profiteering, he said.

“We are requesting them to give us the necessary stocks. We are also meeting them to fix a price cap between Rs 1,100 to Rs 1,400, he said.

“I am also requesting pharmacists not to hoard and sell (the anti-viral drug) in the blackmarket. The consequence can be severe,” the minister said.

He appealed to doctors not to prescribe Remdesivir unless it is necessary.

Let us go as per protocols, he said.

“We have asked to keep a check and hoarding will not be tolerated,” he said.

There have been reports of a shortage and we are taking necessary steps, said Medical Education Minister Amit Deshmukh.

sought to know why the state was getting fewer number of COVID-19 vaccine doses as compared to some other states, including Gujarat and Madhya Pradesh, even as it is leading the vaccination drive and has the highest number of active cases in the country.

His statement comes a day after Union Health Minister Harsh Vardhan saidthat the “lackadaisical attitude” of the Maharashtra government had singularly bogged down the entire country’s efforts to fight the virus.

In a Facebook live, Tope reiterated that Maharashtra requires 40 lakh vaccine doses per week, and made it clear that the vaccination drive was not an issue of conflict between the Centre and the state.

He said the state on Thursday received7.5 lakh doses.

“Today, after I spoke to the Union health minister,I was told that we will get 17.5 lakh doses after April 15,” Tope said.

“Why is Maharashtra, which is leading the vaccination drive and has the highest number of active cases, getting only 7.5 lakh doses?” he asked.

He said that the state accounts for 55 per cent of the total number of active cases in the country and the vaccination supply should be as per the need.

“This is what we expect. The state and the Centreneed to unitedly save people from corornavirus,” he said.

“We will maintain the (vaccination) level of six lakh (doses) per day. We will not go beyond that at this stage, but at least give us 40 lakh vaccines per week,” Tope added.

Maharashtra has the maximum number of active patients- around 4.5 lakh as on date, while its total caseload has crossed the 30 lakh-mark, he said.

“Maharashtra is a big state, geographically and in terms of population. The Centre should compare Maharashtra with other states in terms of number of patients , tests, active patients,” he said.

“We hardly have nine lakh doses left, which would last one day or one-and-a-half days,” he said, adding that several vaccination centres in Satara, Sangli and Panvel have been shut due to the shortage.

The minister also said that the state was following the ICMR guidelines of 70:30 ratio of RT-PCR test and rapid antigen test (RAT).

“We are strictly following what the ICMR suggested,” he said, while pointing out that in Uttar Pradesh it is the other way round 90 per cent RATs and 10 per cent RT-PCRs. Many developed countries have started vaccinating people above 18 years of age. Considering the rapid rise in cases in Maharashtra, the state government has demanded vaccination for 18 to 40 years age group,” he said.

Health Minister Harsh Vardhan, however, dismissed as “farce” the “hue and cry” by certain states about partisanship by the Centre and called it an attempt to hide their own incompetence, saying non-BJP ruled Maharashtra and Rajasthan figured among the top three states based on allocation of vaccines.

As COVID-19 cases in India hit a record high, Vardhan said that 9.1 crore vaccine doses have been utilised, while 2.4 crore are in stock and 1.9 crore vaccines are in the pipeline, indicating there are sufficient doses available for all states.

“Hue and cry by certain states about partisanship by the Union government is just a farce, an attempt to hide their own incompetence.

Maharashtra and Rajasthan are 2 of the top 3 states based on allocation of COVID-19 vaccine doses.

“Both are non-BJP governed states,” Vardhan said in a tweet.

Releasing the figures, he said in another tweet, “Let’s put an end to fear mongering now! #COVID19 vaccine doses: total administered: 9 cr+ In stock/nearing delivery to states: 4.3 cr+ Where does question of shortages arise? We’re continuously monitoring and enhancing supply.”

In a strongly worded statement Vardhan on Wednesday hit out at Maharashtra and some other states, accusing them of trying to cover their “failures” and spreading panic among people by demanding vaccination of all without inoculating enough of eligible beneficiaries.

People above the age of 45 are currently eligible for vaccination.

Vardhan also said the allegations of vaccine shortage are utterly baseless and the states, including Maharashtra need to improve the implementation of their testing and containment strategies and vaccination drive.

He said the “lackadaisical” attitude of the Maharashtra government has “singularly bogged down” the entire country’s efforts to fight the virus.

Maharashtra Health Minister Rajesh Tope on Thursday sought to know why the state was getting fewer number of COVID-19 vaccine doses as compared to some other states, including Gujarat and Madhya Pradesh, even as it is leading the vaccination drive and has the highest number of active cases in the country.

Meanwhile, vaccination could not take place at 25 private Mumbai hospitals due to a shortage of doses on Thursday, the city civic body claimed.

The Brihanmumbai Municipal Corporation (BMC), in a release, said the jabs couldn’t be administered at 25 of the 71 approved vaccination centres as the doses had run out of stock at these private facilities.

However, doses were given to eligible beneficiaries at the remaining centres, but the current stock will last only for a day and the civic body is continuously making efforts to procure more shots, the release said.

At present, the civic body has activated 120 COVID-19 vaccination centres, 49 of them run by the Maharashtra government and the BMC, across Mumbai, it said.

According to the civic body release, of the balance stock (1,48,130), 44,810 are kept for the second dose as per the state government’s directive.