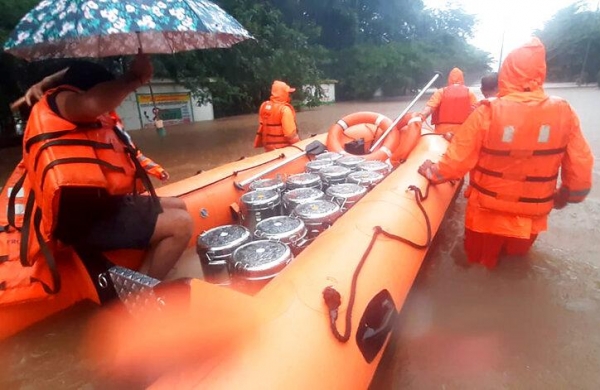 By ANI
MUMBAI: Maharashtra Chief Minister Uddhav Thackeray will leave for the flood-affected Mahad by helicopter from Mumbai at 12 pm on Saturday.

He will also visit the flood-hit Taliye village during his visit, the Public Relations Room (Chief Minister’s Secretariat) informed.

A total of 44 bodies have been retrieved from the debris of the Mahad landslide, and the 35 who were injured are under treatment.

Updating about the landslide triggered due to incessant rain, the Raigad District Collector, Nidhi Chaudhary said that 35 people who have been injured are under treatment.

“Total 6 locations experienced landslides in Raigad district. At one location, rescue operation still continues. According to officials and staff present at the spot, around 50 more people are feared trapped under the debris,” Raigad DC said.

Eight patients have, so far, have arrived at JJ Hospital and they are stable now, said the Medical Superintendent of JJ Hospital.

Maharashtra Minister of Relief and Rehabilitation, Vijay Wadettiwar informed that 136 accidental deaths have been reported in Maharashtra till last evening due to rain and other monsoon-related incidents.

Thackeray on Friday announced ex-gratia of Rs 5 lakh each for the kin of those who lost their lives in the landslides caused by torrential rainfall in various parts of the state.

“CM Uddhav Balasaheb Thackeray has announced Rs 5 lakh each for the kin of those who lost their lives in the landslides caused by torrential rainfall. The state will also incur the costs of treatment for those injured,” CMO wrote in a tweet.

After taking stock of the situation, Uddhav Thackeray told reporters, “Due to landslides in Talai village, Raigad around 35 people have lost their lives. Rescue operation is underway at many places. I have ordered the evacuation and relocation of people who are living in areas where there is a possibility of landslide.”

“NDRF and other rescue teams are facing problems reaching to the flood-affected areas in Chiplun as the roads and bridges are damaged. The situation remains tense”, said the Chief Minister.

According to the Chief Minister’s Office (CMO), the state will also incur the costs of treatment for those injured.

“NDRF and other rescue teams are facing problems reaching to the flood-affected areas in Chiplun as the roads and bridges are damaged. The situation remains tense”, said the Chief Minister.

Several areas in Maharashtra have been battered by rain over the past few days. The Chief Minister was informed about the flood situation in Mahad by the Raigad District Collector.

Meanwhile, Prime Minister Narendra had also announced ex gratia of Rs 2 lakh each for the next of kin of the deceased.

The Western Naval Command of the Indian Navy has mobilized rescue teams to provide assistance of considerable resources to state and district administrations of affected areas in the large parts of Maharashtra, Karnataka, and Goa reeling under extensive flooding due to incessant rains and consequent overflowing of riverbanks and dams over the last few days.

A total of seven Naval Flood Rescue Teams (FRTs) from Mumbai have been deployed to Ratnagiri and Raigarh districts commencing from July 22.

“One Seeking 42C Helicopter from, Mumbai was deployed for aerial reconnaissance at Poladpur/Raigad on July 23. One ALH helicopter from Goa was positioned at Ratnagiri for relief/rescue AM 23 July, Additional Flood Rescue Teams are being maintained on a high degree of readiness at Mumbai, for immediate deployment,” according to the Indian Navy.

In Karnataka, at Karwar, the Indian Naval Emergency Response Team (ERT) comprising 17 Divers, five Geminis, associated equipment such as Life Jackets and Life Buoys was deployed in the morning hours on July 23 on the demand of assistance from the District Collector, Uttara Kannada District to rescue people stranded near Kadra Dam, Mallapur Kurnipet, Kaiga due to heavy rains and floods.

The team was able to successfully evacuate over 100 stranded people at Singudda and Bhaire villages whilst rescue efforts are still going on at Kaiga and Mallapur.

The rescued personnel were shifted to safe locations in coordination with the district administration. In another swift search and rescue mission undertaken at Dongri in the Gangavalli river belt, eight personnel stranded in two hotels were airlifted by Naval Advanced Light Helicopter (ALH), when local attempts for rescue were unsuccessful.

The Naval ALH was launched from Goa and completed the rescue of the stranded people in over two hours successfully.

In addition to providing aerial support to Karwar rescue efforts, a sortie was made to Ganjem near Goa’s Ponda to check and verify the receding water levels. Another ALH has been deployed at flood-affected Ratnagiri to undertake search and rescue missions, the Navy added.

As per the official figures, at least 129 people have lost their lives in rain-related incidents in Maharashtra over the last two days as the state continues to receive heavy downpours.

The Indian Army has also mobilised teams to Maharashtra, which have been hit by torrential rainfall that triggered landslides and flooding in several districts of the state.

The Army under ‘Operation Varsha’ has mobilised columns in action for flood relief in the state. A total of 15 relief and rescue teams comprising troops from Aundh Military Station and Bombay Engineer Group based at Pune have been deployed overnight in affected areas of Ratnagiri, Kolhapur and Sangli districts of the state.

The Army said based on the request by the civil administration it has mobilised flood relief and rescue teams to assist the local administration in flood-affected areas- in the districts of Ratnagiri, Raigad, Pune, Satara and Kolhapur and Sangli.

The Western Naval Command of the Indian Navy based on requests received for assistance from civil authorities has deployed a total of seven Naval Flood Rescue Teams (FRT) from Mumbai to Ratnagiri and Raigad districts.

Also, Maharashtra Coast Guard has pressed two disaster relief teams (DRTs), one each Mahad and Chiplun, besides pressing a helicopter into rescue operations. “These teams are working in tandem with the local administration and have rescued 52 people so far and shifted them to safe locations,” the Coast Guard said.

The Coast Guard has extended the facility of its airbase at Ratnagiri to Indian Navy and Indian Air Force aircraft to operate from this base for rescue and relief operations in Maharashtra.Maharashtra Chief Minister Uddhav Thackeray on Friday announced ex-gratia of 5 lakh each for the kin of those who lost their lives in the landslides caused by torrential rainfall in various parts of the state.

Navi Mumbai and Thane have been put on Orange alert, while Mumbai is on Yellow alert.

Meanwhile, traffic on the South Western Railway (SWR) route continues to remain affected for the second consecutive day on Saturday, a day after two landslides occurred on the Goa-Karnataka border besides the derailment of a train in the section, an official said.

The landslides took place on Friday morning in the ghat (hilly) section of Hubballi division of SWR- between Dudhsagar and Sonaulim, and between Caranzol and Dudhsagar.

A senior official of the SWR said that a train running between Mangaluru Junction and the Chhatrapati Shivaji Maharaj Terminus (CSMT) in Mumbai, which had been diverted from the Konkan Railway route due to overflowing Vashishti river near Ratnagiri in Maharashtra, derailed on the SWR’s Dudhsagar-Sonaulim section in Goa on Friday morning.

“The engine and the first general coach derailed. But no passenger was reported to be injured,” he said.

Due to this, the train traffic on the route is yet to resume, he added.

Another train, Hazrat Nizamuddin-Vasco Da Gama that was travelling towards Vasco town in Goa was detained between Caranzol and Dudhsagar in Goa, the SWR said in a statement.

The SWR said it had already taken several contingency measures before the start of the rainy season.

These measures were taken at suitable stations for any exigency in the ghat section during heavy rainfall, it said.

“As part that, JCB and other machines, and wagon loaded with boulders were kept ready at Castle Rock, Tinaighat and Kulem. They have been pressed into service to the spot of landslide along with the tram of trained technicians to carry out restoration of track/train services at the earliest,” the SWR said.

Vasco railway police inspector Rajan Nigale said that the three scheduled trains on the SWR have been diverted/cancelled or diverted for a day though the debris on the track has been cleared.