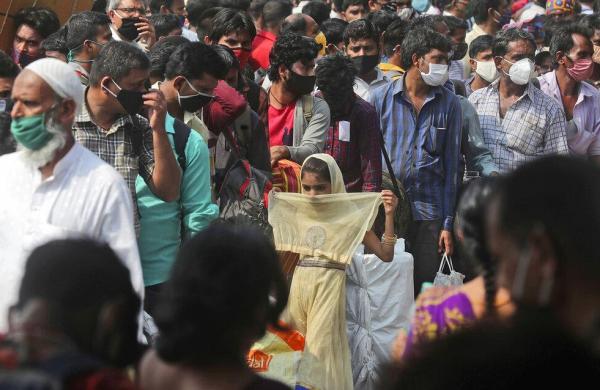 By Express News Service
MUMBAI/NEW DELHI:  Maharashtra, where lockdown-like restrictions are already in place since April 15, is headed for a 15-day total lockdown. The Cabinet meeting on Tuesday unanimously decided to impose strict lockdown from Wednesday night.

The final announcement will be made by Chief Minister Uddhav Thackeray on Wednesday, health minister Rajesh Tope said.

The Cabinet also decided to cancel Class 10 exam of the state board.

Tope said the state is facing a severe shortage of medical oxygen and Remdesivir injection, while hospital beds are fully occupied.

“If we don’t act now, things will be difficult to handle,” he added.

Another minister, Jitendra Awhad, said Uddhav was initially reluctant to go for a complete lockdown but the ministers prevailed over him.

The state on Tuesday reported 62,097 fresh coronavirus cases, taking the tally to 39,60,359, while 519 more patients succumbed to the infection, said a health department official.

The new fatalities pushed the statewide toll to 61,343, he said.

Out of the 519 fatalities, 307 occurred in the last 48 hours and 114 last week, while 98 deaths took place in period before the last week, but were added to the toll now, the official said.

Also, 54,224 patients were discharged from hospitals during the day, raising the number of recovered cases to 32,13,464, he said.

With this, Maharashtra’s active cases increased to 6,83,856, the official said.

Maharashtra’s COVID-19 recovery rate stood at 81.14 per cent, while the fatality rate was 1.55 per cent, the department said.

The Nashik division reported 8,601 cases, including 2,122 in Nashik city, while 2,033 infections were registered in Ahmednagar district.

Out of 116 fresh deaths in the division, 28 were from Nashik district followed by Ahmednagar and Nandurbar districts at 16 each, the health official said.

Out of 93 deaths in the division, 45 deaths were from Solapur city alone followed by 21 in Pune city, the official said.

The Latur division reported 4,336 cases along with 65 deaths.

Out of the 65 deaths in the Latur division, 21 were from Nanded district, 16 from Beed and 12 Osmanabad district, he said.

The caseload of the Akola division increased by 2,400.

The division also reported 61 deaths of which 18 were in Nagpur city and 16 in Bhandara district, the official said.

As many as 146 patients from other states have been treated in Maharashtra so far.

Grocery and food shops will remain open only between 7 am to 11 am till May 1, the Maharashtra government announced on Tuesday as part of its efforts to curb the alarming rise in coronavirus cases.

The new restriction will come into effect from 8 pm on Tuesday and remain effective till 7 am on May 1.

The state has been adding more than 50,000 COVID-19 cases daily over the last two weeks.

Various other restrictions are already in place under the state’s `Break the chain’ program to control the spread of the virus.

The latest order was issued by the Disaster Management and Relief and Rehabilitation department.

“All grocery, vegetable shops, fruit vendors, dairies, bakeries, confectioneries, all types of food shops including chicken, mutton, poultry, fish and eggs, shops related to agricultural implements and farm produce, pet food shops, shops related to materials for impending rainy season” will remain open from 7 am to 11 am, said the order.

Home delivery from such shops may be allowed between 7 am to 8 pm, but the time window can be changed by local authorities, it said.

Local authorities can include additional services or entities in the essential services category only after the consent of the state Disaster Management Authority, the order said.

Meanwhile, the Bombay High Court on Tuesday directed the Maharashtra government to ensure that accused persons arrested by the police henceforth were tested for COVID-19 and sent to judicial custody only if their result came negative.

A bench of Chief Justice Dipankar Datta and Justice GS Kulkarni also directed that all arrested accused persons above 45 years of age must be compulsorily vaccinated against coronavirus before being sent to prisons.

The bench said these steps were necessary to prevent the spread of COVID-19 infection in prisons across the state.

Last week, the HC took suo moto (on its own) cognisance of newspapers reports on the rising instances of COVID-19 among inmates and staff in the 47 prisons across Maharashtra.

The court converted the issue into a criminal Public Interest Litigation (PIL) and sought the state government’s response on the same.

On Tuesday, Advocate General (AG) Ashutosh Kumbhakoni, who appeared for the state government, told the HC that till April 18 this year, 188 prison inmates had tested positive for COVID-19 across Maharashtra.

He said that while the total capacity of prisons across Maharashtra was to house 23,127 inmates, 35,124 inmates were currently lodged in the 47 jails across the state.

This led the court to issue a slew of directions, including COVID-19 tests on arrested accused persons and vaccination of those have 45.

The HC said it needed to intervene to “pave the way for saving the lives of the inmates of correctional homes and instill in them a sense of confidence that the State, of which the judiciary was a part, was also concerned about their well-being.”

“We also direct that any accused in excess of 45 years of age, upon arrest, shall be sent for vaccination to the nearest vaccination centre without fail,” the bench said.

The HC permitted the People’s Union of Civil Liberties (PUCL) and its counsel, senior advocate Mihir Desai, to be impleaded as parties in the PIL to assist the court.

The PUCL had filed a PIL last year on the spread of COVID-19 among prison inmates and staff.

Another bench of the HC had at the time issued a set of guidelines and standard operating procedure to be followed in prisons.

On Tuesday, AG Kumbhakoni told the HC that the vaccination programme for eligible prisoners and staff was already underway.

He said those inmates who had been released on bail or emergency parole last year owing to the pandemic were still out.

The HC, therefore, directed the state authorities to decide upon all emergency parole applications immediately, “without wasting any time.”

Kumbhakoni further told the court that last year, the state had constructed 36 temporary prisons in educational institutes to decongest the existing jails.

They were given back when the coronavirus situation improved but it was now reclaiming these temporary prisons.

Fourteen such temporary prisons had been reclaimed, he said.

The AG said the state has decided that no new inmate will be admitted to a prison without COVID-19 test.

The HC also directed the state to inform the court if there had been a drop in the crime rate since April 14, when stricter guidelines to contain the spread of COVID-19 came into force in Maharashtra.

The HC will hear the matter further on Thursday.

People must follow COVID-19 norms stringently and avoid going to markets regularly to stem the outbreak as the situation in Palghar could turn precarious in two weeks if the current rise in cases continued, Maharashtra minister Dada Bhuse said on Tuesday.

Bhuse, who is guardian minister of the district, reviewed the situation here, speaking to administrative and health officials on the infrastructure in place to combat the surge, as well as the availability of medicines like Remdesivir and items like medical oxygen, ventilators.

“Make vegetable purchases etc once in two to three days. Avoid going to the markets regularly as it would break the chain and contain the spread of the virus,” Bhuse told reporters here.

“If the cases continue to rise this way, then in two weeks the situation may get precarious as hospitals will overflow with patients.

People must take the issue seriously and adhere to COVID-19 norms strictly,” the minister said.

Earlier in the day, the Maharashtra government announced that grocery, vegetable and food shops etc will remain open only between 7am to 11am till May 1.

Pune: Hospital runs out of oxygen, patient on ventilator shifted

A COVID-19 patient had to be shifted elsewhere from a city hospital when it ran out of oxygen on Tuesday.

The incident at the Yog Multispeciality Hospital showed how acute the problem of oxygen shortage has become even as the city reported over 5,000 new infections in the last 24 hours.

“Since morning, we have received 32 oxygen cylinders but our requirement is 200 per day. We are receiving another 15 cylinders from the district administration,” said Dr Abhijit Darak, a physician at the hospital.

In the morning, the hospital had oxygen supply which would have lasted for one hour, so a patient who was on ventilator was shifted to another private hospital, he said.

Luckily, an oxygen plant he visited agreed to supply 60 cylinders by night, he said.

While he is supposed to attend to patients in the ICU, the shortage is forcing him to visit oxygen plants instead in search for oxygen cylinders, he said.