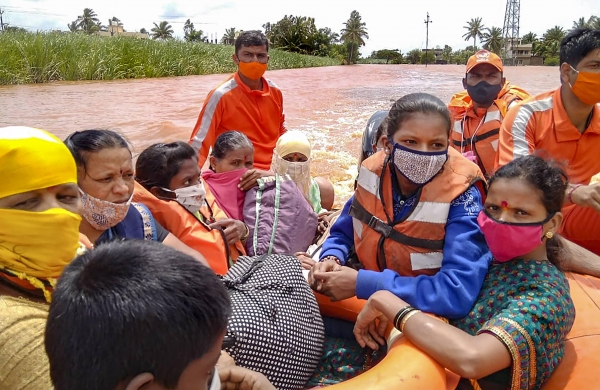 By PTI
NEW DELHI: A ‘central war room’ has been established at the Department of Military Affairs in the Defence Ministry for close coordination among the three wings of the armed forces for flood relief operations in Maharashtra, the Indian Army said on Sunday.

With unprecedented rains and resultant overflowing of various rivers, a number of areas in Ratnagiri, Kolhapur, Sangli and several other districts of the state have been inundated.

“A central war room has been established at the Department of Military Affairs for close coordination between the three Services for ongoing flood relief operations in Maharashtra,” the Indian Army said on Twitter on Sunday.

The number of deaths due to flooding, landslides and other rain-related incidents in parts of Maharashtra reached 113 on Sunday with one more casualty reported in the last 24 hours, while 100 people were missing after the monsoon fury.

On the request of the civil administration, the Indian Army’s Southern Command has mobilised flood relief and rescue teams to assist locals in flood-affected areas.

As on Saturday, a total of 15 flood relief teams from Aundh Military Station and Bombay Engineering Group, Pune were deployed for flood relief and rescue operations in Sangli, Palus, Burli and Chiplun, an official statement said.

“The columns are involved in rescue of villagers stranded in submerged areas and restoring normalcy in the inundated areas.

Over 100 people have already been rescued from the affected areas and relocated to safe locations,” it had said on Saturday.

The Indian Army is also providing cooked meals and drinking water to the villagers.

Medical camps have been established wherein, teams of army doctors and nursing assistants have been deployed for providing necessary first aid and medicines to evacuated locals, the statement added.