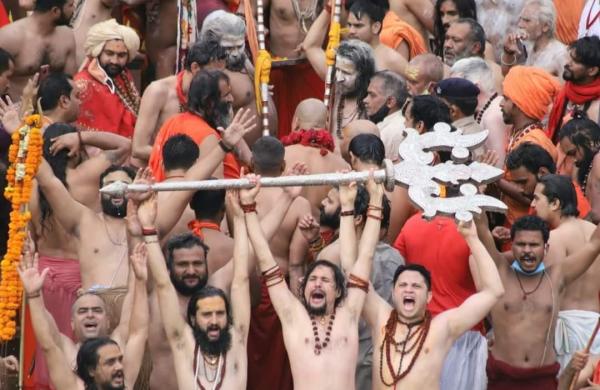 Express News Service
DEHRADUN: No Covid norms were adhered to in Haridwar on Monday on the occasion of Shahi Snan (Royal Bath) on Somvati Amavasya which is considered auspicious in Hindu religion.

Senior police officials said that penalizing is not possible as it could create a stampede.

Kumbh Mela IG Sanjay Gunjyal said, “We are unlikely to take strict action due to the huge gathering. A stampede-like situation can occur if we try to apply force.”

The officials also said that they are not able to implement any Covid rules by force.

Earlier, the ritual bath began as early as 4.30 am and ghats were close for general public at 7 am. By then, seers, priests and saints from the 13 akhadas were to take their traditional, ritual baths.

At least 35 lakh people took a dip in the Holy Ganges in Haridwar along with all 13 akhadas.

The fears of the mega religious event becoming a super spreader could come true as pilgrims from across the country in lakhs are visiting the city without adhering to Covid rules, says experts.

Anoop Nautiyal from social development firm ‘Communities Foundation’ said, “The pictures and videos of the Mahakumbh say it all. Our fears of this event becoming a super spreader will now be realized when pilgrims return to different parts of the country, probably with Covid infection.”

Meanwhile, Uttarakhand Chief Minister said that Mahakumbh 2021 cannot be compared with last year’s ‘Markaz’ gatherings. He asserted that arrangements are in place to check the spread of Covid during the mega event.

“The Markaz event last year was in a confined building while the Kumbh is spread in large open area of the holy city of Haridwar. We have also ensured that Covid norms are being followed. Our health infrastructure in Haridwar and elsewhere in the state is equipped to deal with it, ” said the CM.

Voices from various quarters have compared the event with the controversial ‘Tabhligi Jamaat’ event of last year.