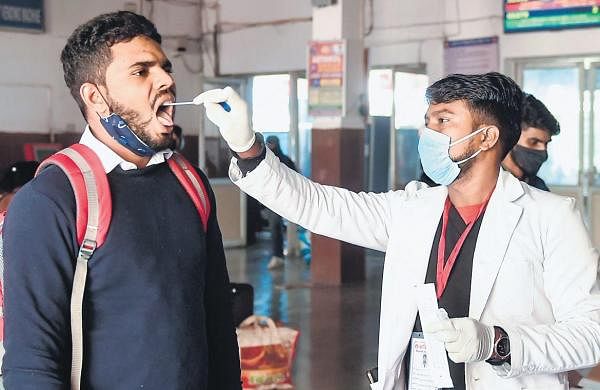 MUMBAI: The finance capital on Wednesday recorded a sharp rise in new Omicron variant cases, amid reports of Covid-19 third wave, by clocking 2,510 infections, the highest daily addition since May 8, which is reportedly an 82 percent surge. The national capital Delhi recorded 86 percent surge with 923 cases. Meanwhile, Kolkata reported 540 cases, Bengaluru 400 and Chennai 294 cases.

Maharashtra recorded a spurt in new cases at 3,900, including 85 of Omicron, with the daily count rising by 1,728 from a day before, the state health department said even as Health minister Rajesh Tope expressed concern over the spiralling number and termed it as ‘alarming.’

With the addition of 3,900 cases, which were detected after 1,23,248 coronavirus tests were conducted in the last 24 hours, the statewide infection count shot up to 66,65,386, the health department said.

The state recorded 20 fresh deaths, taking the number of fatalities to 1,41,496, the health department said in a bulletin.

Currently, 1,22,906 people are in home quarantine and 905 people in institutional quarantine, the bulletin added.

On the Omicron front, Maharashtra recorded 85 fresh infections, the highest single-day tally by any state in the country of the new strain so far.

“Today, 85 cases of the Omicron variant have been reported in the state.

Of these, 47 patients have been reported by the National Institute of Virology (NIV) – (where samples were sent for genome sequencing) and 38 by the Indian Institute of Science Education and Research (IISER),” the health bulletin said.

Thirty-eight Omicron cases reported by IISER are from community surveillance and as per preliminary information they do not have a history of any international travel, it said.

Of the 47 patients reported by the Pune-based NIV, 43 are international travellers and four are their close contacts, the bulletin added.

On Tuesday, the state had recorded 2,172 cases and on Wednesday it registered nearly 80 per cent rise in infections in a span of 24 hours.

Health Minister Tope said in view of the rising coronavirus cases, the existing curbs have to be observed strictly at parties and other public events.

On December 10, the state had 6,543 active cases of COVID-19, according to a health department bulletin.

However, the health department data in the evening showed active cases stood at 14,065.

The rise in active cases in Maharashtra is “alarming”, he said.

State Tourism minister Aaditya Thackeray urged people not to panic, but exercise extreme caution in the wake sharp rise in coronavirus cases in Mumbai and stressed on vaccination and widespread use of face masks.

Though hospitalisations and positivity rates were low, the COVID-19 cases have surged since last week, Thackeray said.

After reporting daily cases under-500 on most days in the last few months, the city is witnessing a spike in infections.

He further said that in the next 48 hours, the BMC will be getting in touch with all educational institutions in the city to plan an organised vaccination drive for children in the age group of 15 to 18 years, who are to be targeted in the expanded inoculation campaign.

The authorities are also preparing a list of health workers, frontline staff and senior citizens who are eligible to take the booster dose of COVID-19 vaccine, which should be administered nine months after the second shot, the tourism minister said.

Thackeray said all public places in the city will remain shut on December 31.

Speaking about the bed capacity at hospitals, Thackeray said there were 54,000 beds available in the city at present.

“We have also asked all the Covid care jumbo centres to be at stand by, at all readiness levels, along with basic facilities to medical infrastructure.

Testing and tracing protocols for all that have been operational all through, were reviewed too,” Thackeray tweeted later on.

Earlier in the day, NCP leader Supriya Sule said she and her husband had tested positive for coronavirus.