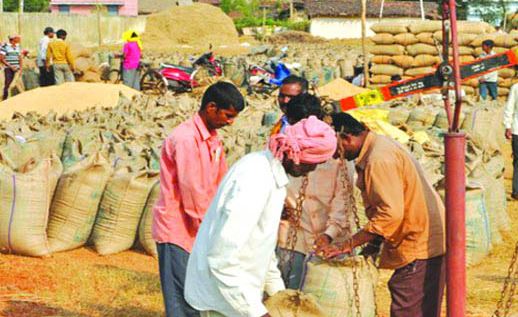 In Chhattisgarh, a major campaign to procure paddy on support price from paddy growing farmers will start from December 1. All preparations for this have been completed by the state government. Chief Minister Shri Bhupesh Baghel has instructed the officials that farmers should not face any inconvenience during paddy purchase. Full care should be taken of farmers’ convenience. In the cabinet meeting held on 28th of this month under the chairmanship of the Chief Minister, instructions have been given to purchase paddy from 01 December to 31 January 2021 and purchase of maize from 01 December to 31 May 2021 on support price. Paddy procurement will be started from December 1 at 2 thousand 305 paddy procurement centers in the state on support price. This year 257 new paddy buying centers have been built.

Due to the farmer friendly policies of the state government, more than 2 lakh farmers who have left farming have returned to the fields, which has increased the acreage. In the Kharif marketing year 2020-21, 2 lakh 49 thousand more farmers have registered to sell paddy as compared to the previous year. Together, a total of 21 lakh 29 thousand 764 farmers have registered to sell paddy at the support price this year. The area under paddy sown by these farmers is more than 27 lakh 59 thousand 385 hectares. In two years, the area under paddy selling has increased from 19.36 lakh hectare to 22.68 lakh hectare and the number of farmers has increased from 12 lakh 6 thousand to 18 lakh 38 thousand. In this way, there is an increase of 3 lakh 32 thousand hectares in area and 6.32 lakh increase in the number of farmers selling paddy on support price

There has been a significant increase in the amount of paddy purchased at the support price in the last two rains. In the year 2017-18, 56.85 lakh metric tonnes of paddy was purchased in the state of Chhattisgarh at the support price. During two years, this figure of paddy procurement reached 83.94 lakh MT. Considering the number of farmers registered to sell paddy this year and the area under paddy, the support price is estimated to be higher than last year. Regarding this, all possible arrangements are being ensured by the state government. Despite the lack of gunny bags for the procurement of paddy, the government is engaged in its management